Once again, I spent the entire day on Saturday and pretty much most of Sunday on family obligations.  But every time I let my mind wonder back to Friday night’s H50, those were the only words that kept coming to mind.

Of course, we could talk about any number of things in this episode.  It was pretty much perfection from beginning to end. We could talk about the action sequences.  The knife fight between Steve and the assassin in his kitchen was not only one of the most brutal and bloody fights we’ve seen in a long time, it was masterfully choreographed and executed.  That knife flip of Steve’s before he runs his attacker through was a thing of beauty. 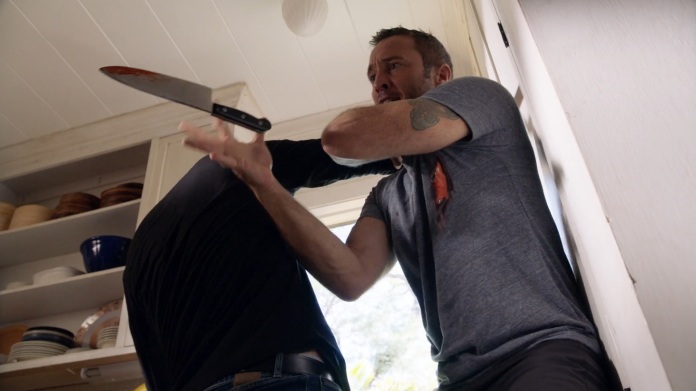 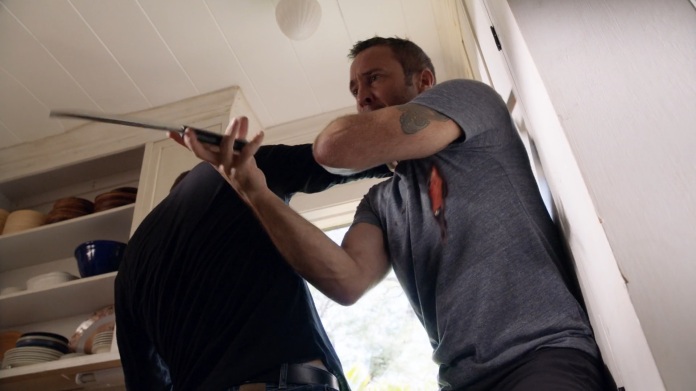 The battle between Steve, Joe and Cole and the assassins sent to take them all out was also superb.  Watching the three of them arming for the attack was incredible.  The booby-traps and the arsenal of weapons they had at their disposal was impressive to say the least.  After over 16 years they all still worked together as a well-coordinated and well-oiled machine.  Their easy banter and comradery a nice juxtaposition to the deadliness of battle they knew was coming.  And, ohhhh, what a battle it was! 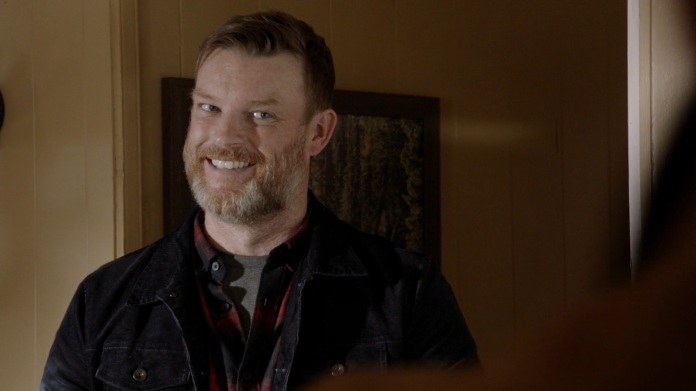 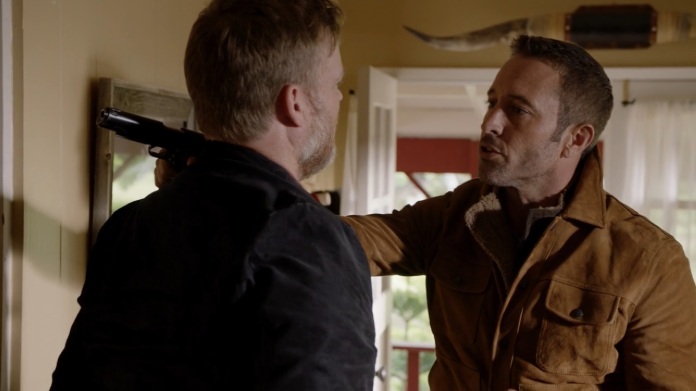 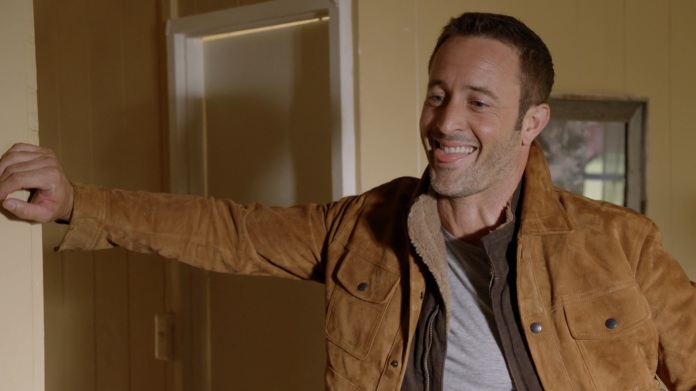 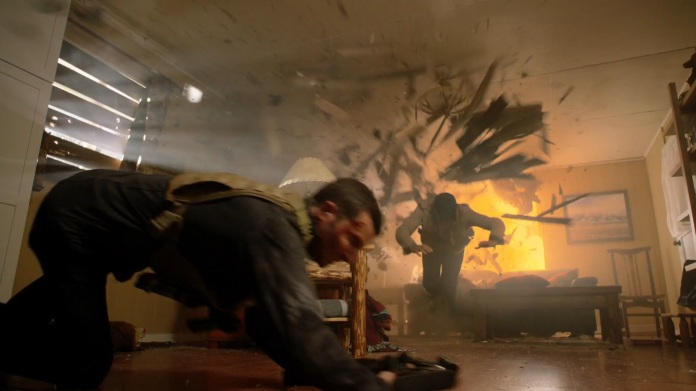 We could talk about Lou Grover and his voicing what everyone already knew.  There was no need for Steve to ask for help.  His team was there for him no matter what he needed.  His certain knowledge that Steve wasn’t just going to go to ground and stay safe but to confront this head on. Lou’s single-minded determination to crack the assassin sent to kill Steve was, as Lou always is in these intense situations, just a bit frightening. He can seem so calm and composed when he’s skillfully manipulating the suspect by hitting all his vulnerable spots.  Using his son as leverage and a promise of time served in Germany was cold, calculating and, most importantly, effective! 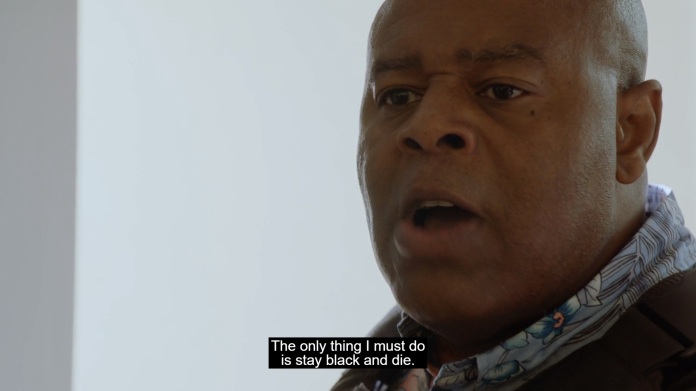 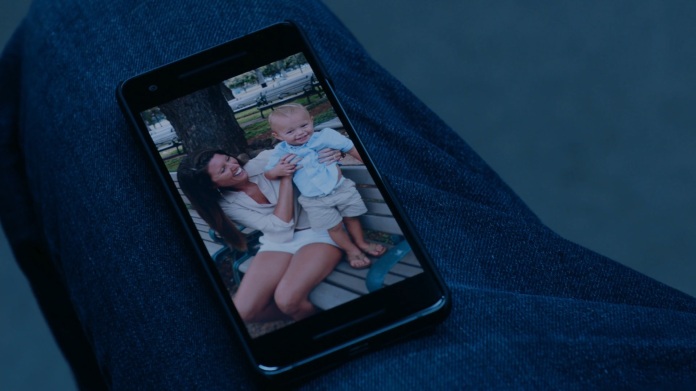 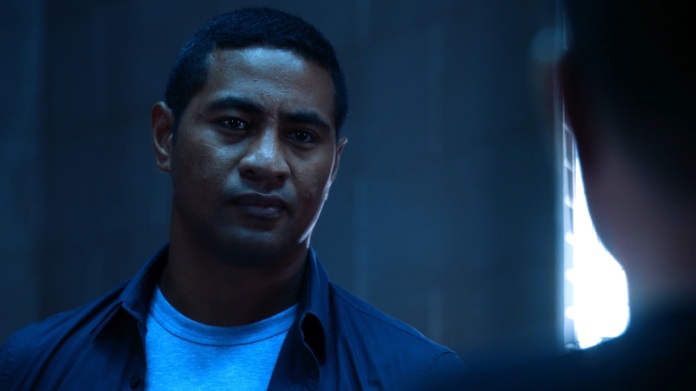 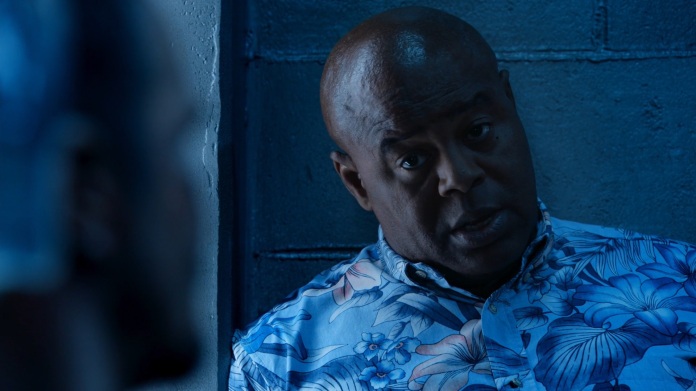 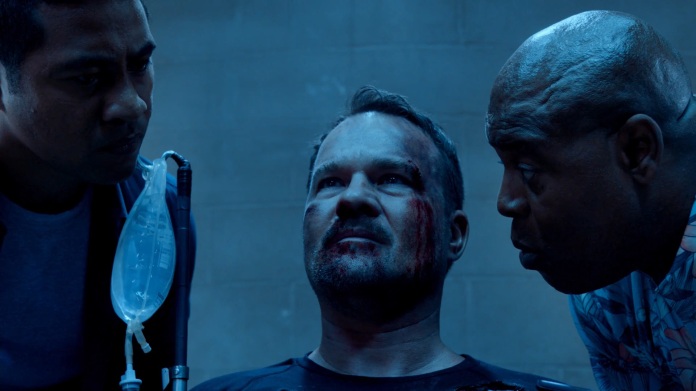 We could talk about the rest of the team being totally relentless in tracking down who was responsible for the contract put out on Steve and the rest of the SEALs.  It’s not anything they haven’t all done in the course of investigations before but this one is more than just a little bit personal.  They worked at a fevered pitch in their determination to give Steve all the information he might need to find out who is responsible.

We could talk about Junior. Junior berating himself for not being there when Steve was attacked.  His determination to be part of the operation to take down those responsible because it’s SEALs who have been assassinated and Junior wants in on the retribution to avenge his brothers.  How he wanted in on that OP more than anything, but he’ll follow Steve’s orders, SEAL Commander to SEAL.  But you could see he was not happy about it one bit from the thunderously murderous look in his eyes. 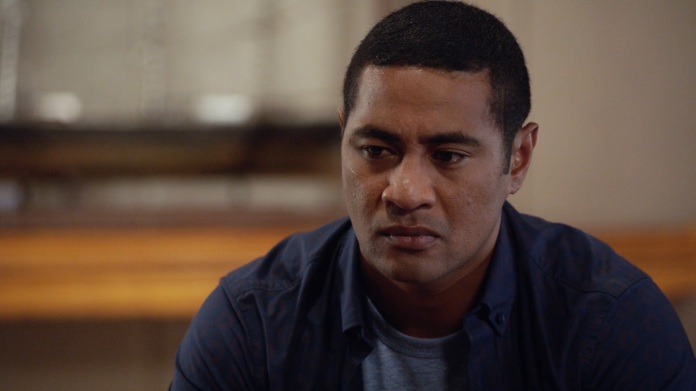 We could talk about the fact that Steve was alone in the house when the assassin came to call.  We could wonder where Eddie was, why wasn’t he out in the ocean with Steve for his morning swim.  Or we can thank the Hawaiian gods that Eddie wasn’t there.  I mean, do you think that assassin would have wasted an instant in putting Eddie down to get to Steve.  Personally, I don’t think I could live through seeing Eddie shot again!

We could talk about Greer and her betrayal of Steve and the SEALS.  We can talk about whether she is intended to be the new “big bad” or if she’s just going to be seen as a bridge to who may or may not be the new “big bad” on the radar, Omar Hassan.  A small boy who watched as Steve’s SEAL team killed his father in that long-ago raid.  Now a 26-year-old businessman with an impeccable record and a hell of a lot of money.  But, he’s no terrorist.  He’s a son out to avenge his father, not a completely foreign concept for this show. 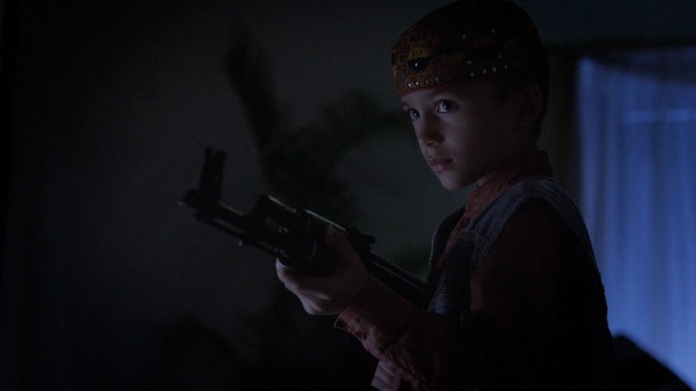 We could talk about the similarity in the names of Omar Hassan and Umar Hassan, the Taliban terrorist who, back in 4.21 kidnapped young Najib and other Afghan children, who captured and tortured Steve and was killed in the Navy SEAL raid that rescued Steve.  We can put to rest any notion that the writers are trying to manufacture a “planned coincidence” between 4.21 and 9.11 because Umar Hassan was a) a terrorist, which Omar is not; b) Umar was Afghani while Omar is Moroccan; c) Umar was at least 10 to 15 years older than Omar; and, most importantly, d) Umar Hassan died in that miserable hole in Afghanistan at the hands of the SEALS. 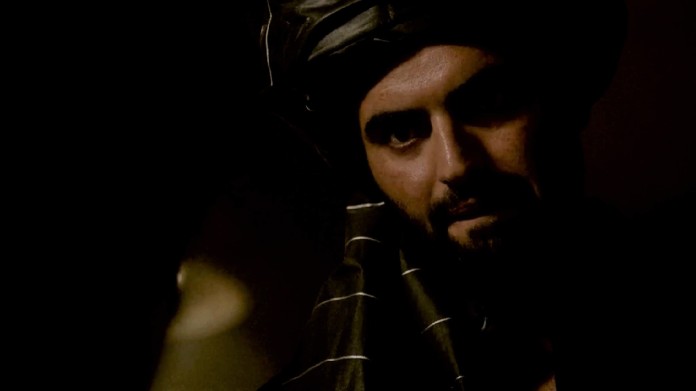 Yes, we could talk about all of that but, of course, there really is only one thing to really talk about in this episode.

There was nothing here we didn’t already know, of course.  We are all fully aware of the powerful relationship between Steve and Joe.  But it was fascinating to watch as every aspect of that relationship was played out on the screen.

Doris had people watching 16-year-old Steve and knew he’d stolen a car in a futile attempt to get back to Hawaii any way he could.  She called Joe and he managed to get Steve out of trouble with no mark on his permanent record.  Because of that, Steve was able to later go to Annapolis, serve in the Navy, be a SEAL and Five-0 and become the extraordinary person he is today.

It was more than obvious from the beginning that Joe thought this could very well be his last mission.  Sitting in the car with Steve, waxing poetic about ponderosa pines with a wistful look on his face, you could see he was resigning himself to the belief this could be the end.  Steve could see it too even if he didn’t realize it at that moment.  That’s why he told Joe to “go into the wind” like Cole and let Steve handle the situation alone.  Joe, being Joe, naturally wouldn’t allow that to happen.  Wouldn’t let Steve have “all the fun”. 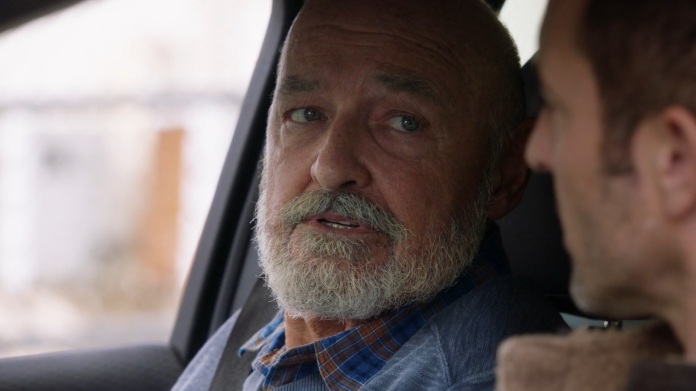 When Steve finds a picture of Joe with a young woman Joe, once again, gets reflective, telling Steve not to make the same mistakes he’s made, not to wait too long to find someone to share his life with.  This is the moment Steve realizes what’s going through Joe’s head.  You could see it on Steve’s face, how concerned he looked that Joe felt the need to pass this advise along at that moment. 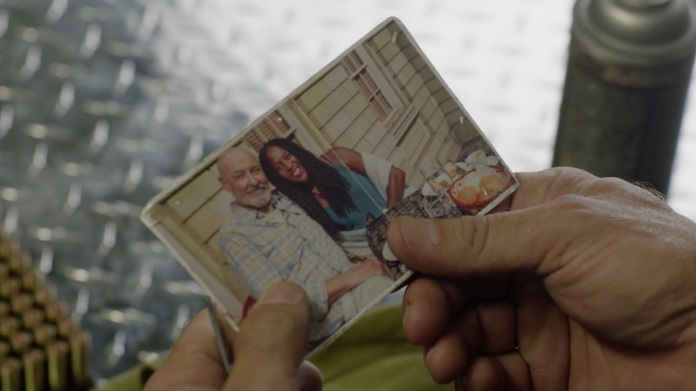 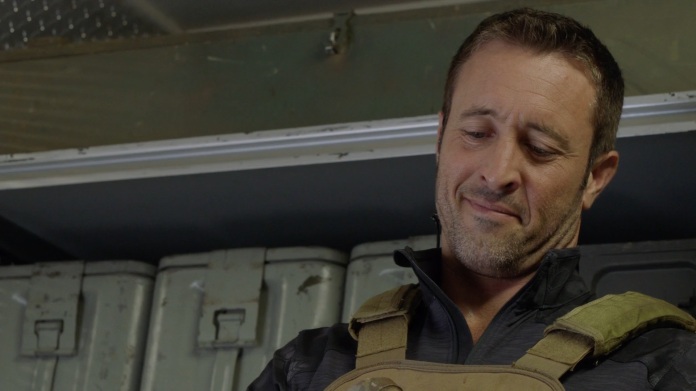 Personally, I wish Joe would have knocked it off with the relationship advice.  His four wives should prove to anyone he’s hardly in a position to tell anyone the best way to sort out their love life.  But I will give him this much.  He did manage to find love with his new lady.  He’s not pining over a lost love or trying to rekindle something long over.  In this regard I agree with Joe.  Steve needs to find someone new, just like Joe did. Someone totally devoted to him, who makes him her top priority, just as he makes her, his.  In all his 41 years, Steve has never met a woman like that.

The final scenes of this episode will go down as some of the best written and best acted scenes ever on this show.  Both Alex and Terry hit major homeruns with material that went above and beyond.  Emotional, gut-wrenching, dramatic.  All terms that don’t even come close to what these last scenes were like.  I was totally gutted by the time the end credits rolled and I know I’m not the only one.

All their best laid plans turn out to be not enough.  They lose Cole in the gun battle.  I was forcibly reminded of watching Steve as he looked on as Freddie was gunned down all those years ago.  Unfortunately, Joe is hit as well.  I think we’ve all been watching this show long enough to know those abdominal wounds, those where the bullet has not exited, are never a good thing.  Joe, tries to downplay it, telling Steve he’s seen worse, but he knows that’s not the case and he knows where he wants to be when the end comes. 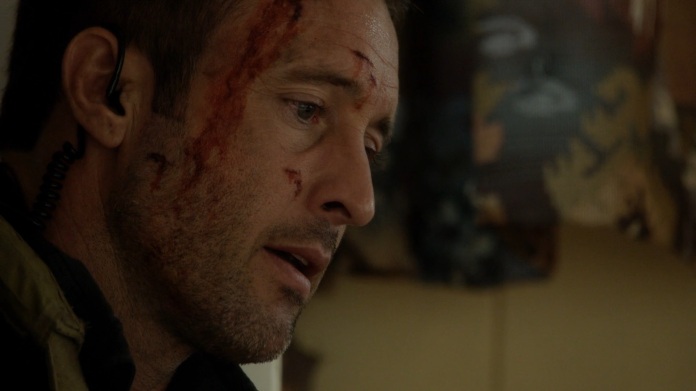 That lone ponderosa pine is calling him one last time.  As they both ride off to what Steve believes is medical help, Joe admits to Steve that he cancelled the medevac that was headed their way.  Steve is furious.  “If you’re not going to fight, I’ll fight for you”.  Of course, we saw the way Steve fought to save Joe not too long ago.  Steve is not ready to give up on him now.  But Joe is ready.  He wants to get to his favorite spot on the ranch, to that magnificent tree one last time. 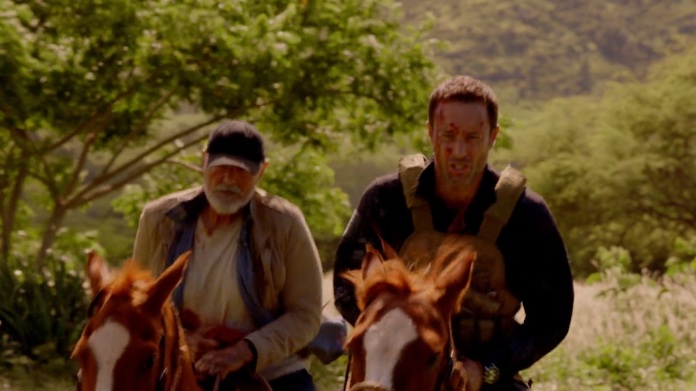 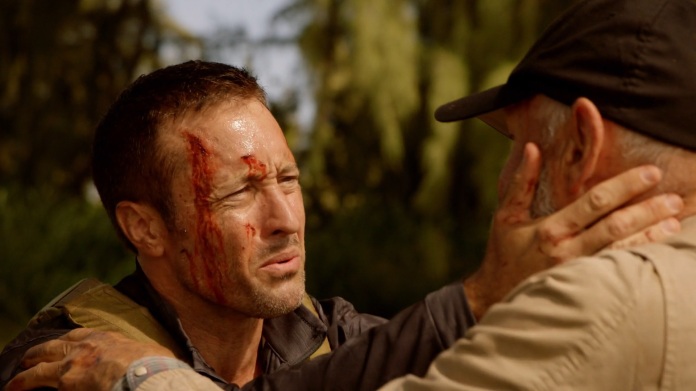 Steve cradles Joe as they sit at the base of the tree and Joe begins to lose his hold on life.  Steve thanks him for that long ago save after he stole that car.  Thanks him for giving him the opportunity to have the life he’s lead.  Joe looks at him like he’s lost his mind.  Doesn’t Steve realize that he thanks Joe every single day just by being the man he’s become?  Doesn’t he realize Joe couldn’t be more proud of the way Steve looks out for the people he loves in his life the same way Joe always looked out for him? 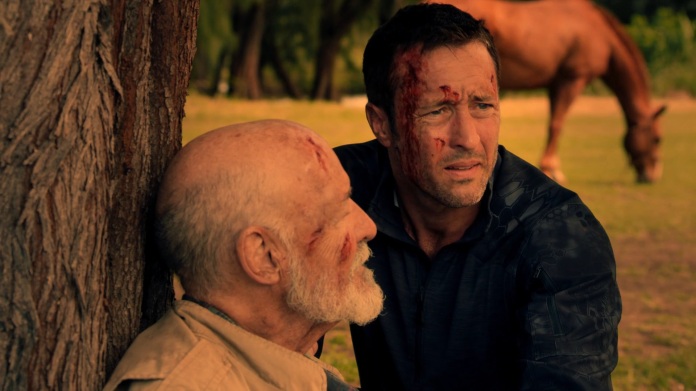 It’s been two days and I’m still gutted.  Gutted by the story, by the loss of Joe and by the stellar acting by both Alex and Terry.  We’ve always said that Alex can portray a dozen pages of dialog with just his eyes and it was gut wrenching in that moment when Steve realized what was going to happen.

“Have you ever in your life seen a sunset like that?”  No Joe, we haven’t.  Your death is a sunset we never, along with Steve, thought we’d see.  “Old soldiers never die, they just fade away”.  And as you faded away into that sunset, with Steve hugging you close, we cried along with him.

Cried for the man who, while infuriating at times, was a good man.  A man who helped teach, guide and shape Steve into the man he is today.  And cried for Steve as well.  Just like the day he had to listen to John die while there was nothing he could do to stop it, Steve sits, cradling the man who became, from the age of 16 on, the only father he really had and we all wept for him and this incredible loss. 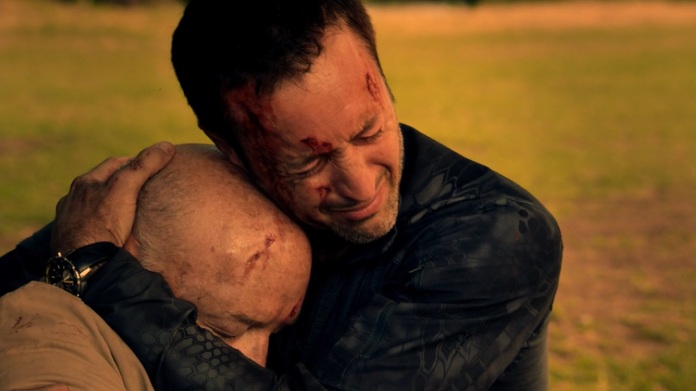 Well, I don’t know what else to say.  This is the last episode of 2018 and as far removed from a Christmas episode as you can possibly get.  We have a little under a month of Christmas hiatus to pull ourselves together before the ramifications of this episode play out in 9.11.  It will be interesting to see how Steve comes through this huge loss.  A loss so much more devastating than any he’s suffered since John was murdered 9 years ago.  I look forward to seeing Alex hit another homerun to start off the new year.

That’s it for 2018 my friends!  Whatever holiday you celebrate, here’s hoping it’s a joyful one filled with everything you love and all the people you love.  See you all in the new year!

All screen caps are mine unless otherwise noted.