Ahhhhhh crossovers! Like everything else in life, there are all kinds of different opinions about them.  There are those who don’t like them because they feel they’re contrived for the sole purpose of just being a crossover, to force a bunch of characters together with no real connection and no thought as to how to make it a good story.  Others don’t like them because while one show might be a favorite, the other isn’t and they feel they’re being forced to watch a show they really don’t want to watch just to see the other half of the crossover.  Or worse, missing out on part of the story because they refuse to watch the other show.  Some just don’t like them… period.

Of course, there’s the flip side; people like me, who simply love them. I’ve always loved them.  I can remember watching the original Magnum back in the 1980s and loving the crossovers they did with “Simon and Simon” and “Murder She Wrote”.  I watched all three shows so getting to see a two-hour block of my favorite shows with all my favorite characters interacting was fantastic.

Even when I don’t watch one of the shows, I like crossovers because it gives me the opportunity to see a show I haven’t seen before and, just maybe, I’ll find a new favorite.  For example, I had never watched NCIS:LA until the H50 Season 2 crossover but having discovered it, I became a big fan of NCIS:LA as well.  Even if I don’t end up watching the other show, that’s ok too.  I just consider the characters of that show like I would any other “guest stars” on my favorite show.  So, yeah…. I really love crossovers and was extremely excited for this H50/Magnum crossover and I’m happy to say, I was not one bit disappointed.

It’s interesting how sometimes it’s seems to be too hard to write a 42-minute episode with just one story but for a two-hour crossover event, one great story spanned both episodes.  One simple plot point, the NOC List, was enough to drive 85 minutes of great TV.  When I first read the press release and it said, “Steve and Five-0 enlist the help of Magnum…..” I couldn’t wrap my head around how it would be written that Five-0 would need the help of a private detective let alone actively “enlist” that help.

What a great idea to have the bad guy Five-0 is tracking be the “cheating husband” Magnum and Higgins are surveilling.  It brought both teams together in such an organic way it was seamless.   It reminded me of the Season 2 crossover with NCIS:LA where the bad guy (Dracul Comescu) was a long-time nemesis of Callen and NCIS.  It makes it so the teams are working together for a real purpose, not just haphazardly being thrown together only for the sake of having a crossover. 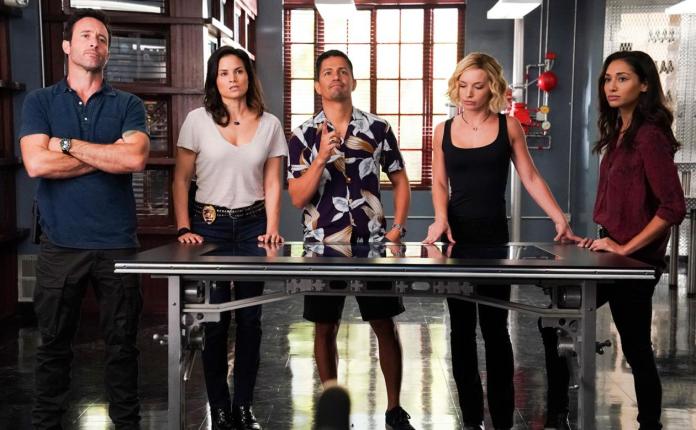 This story was pure H50. It was action packed, it was explosive, and it was convoluted with a classic red herring.  Yeah, there were a couple of things here and there that were a little head scratchy.  Like Eddie was right there to go all “fierce guard dog” on Higgins, but where was he while Casa McG was being trashed, even though, of course, I’m thrilled Eddie wasn’t hurt by whoever broke in.  I also thought the take down of the guy at Halawa and the retrieval of the SD card was a bit too easy, but I understand why it had to be wrapped up at that point to move the story forward into the Magnum hour.

Other than that, I can’t really think of anything else about this episode that wasn’t great. And what made it so was the incredible interactions between the casts of both shows.  Everyone who was in the episode had a part to play and everyone contributed to the story.  But it was the humor and the fantastic Easter eggs sprinkled throughout the episode that made it such a hoot to watch.  And judging by all the great behind-the-scenes videos and pictures posted by members of both casts in the weeks leading up to Friday night, it sure looked like they all had a blast working together.  I hope that bodes well for more crossovers with the main casts in the future, even if they can’t be whole episodes. 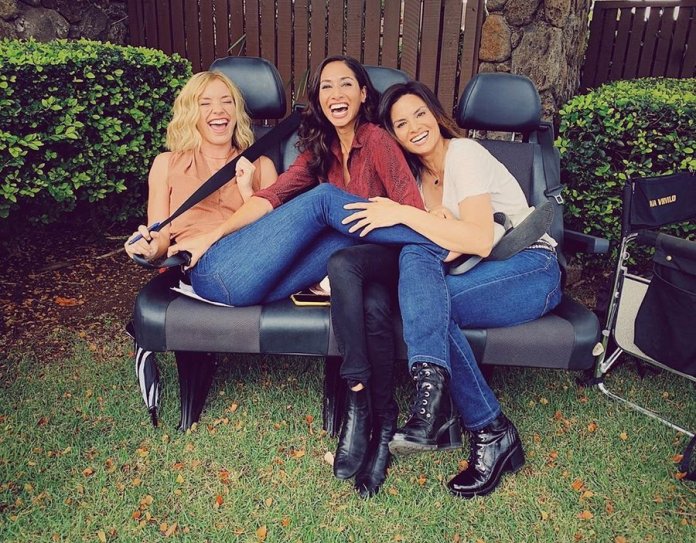 Of course, everyone already knows all the best scenes in the episode.  Every scene between Steve and Thomas was fantastic.  We already knew from sneak peeks that Steve would commandeer the Ferrari.  But, of course, he would 😉🤣. Thomas’s asking if it was a “Rainman” thing and commenting on Steve having control issues was a fantastic call all the way back to the Christmas Episode of Season 1 when Danny said the exact same thing to Steve about him always driving the Camaro.  It’s also great to think back to that three -show panel discussion at Paley when Alex said he liked the idea of a crossover because he wanted to get his hands on that Ferrari. 🤣 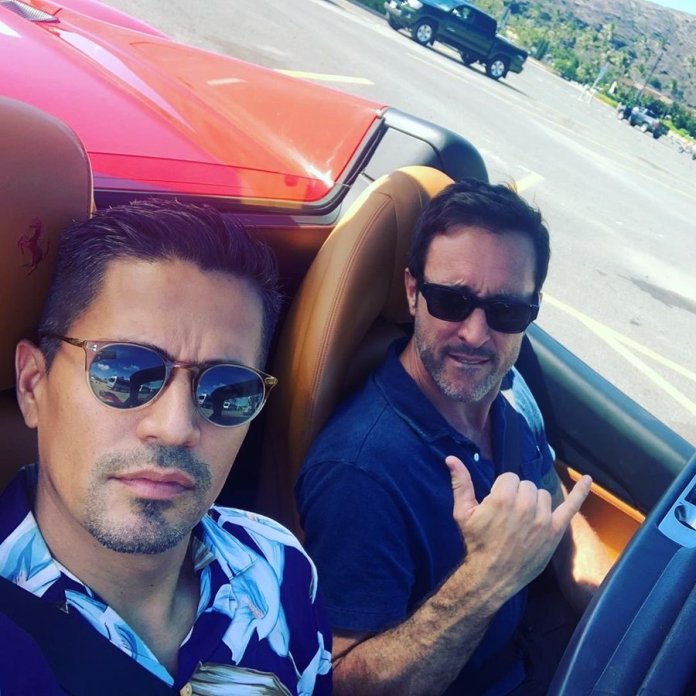 Steve scoffing at the possibility of Thomas being Robin Master’s “White Knight” was funny too.  Mostly because I have to agree with Steve.  Don’t get me wrong, I really like Magnum but when I look at all the SEALs we’ve seen in connection with both these shows, including their buddy Nuzo on Magnum and the real SEALs who guest star on H50, Thomas is the least convincing to me.  He just doesn’t look like SEAL material to me but then, that’s understandable considering I’ve spent the last ten years watching Steve.

The best scene, however, was the one with Steve, Thomas, Rick and TC in the van. Rick and TC fanboying over the “greatness” that is Steve McGarrett was hysterical, made even more enjoyable because of the increasing jealousy of Thomas.  Again, I like him a lot, but he is, as Steve observed about the “White Knight”, very cocky.  Watching him squirm while his buddies gush over Steve was priceless. It was also really cool to be reminded just how awesome SuperSEAL has always been, so much so that he’s legend among other SEALs. 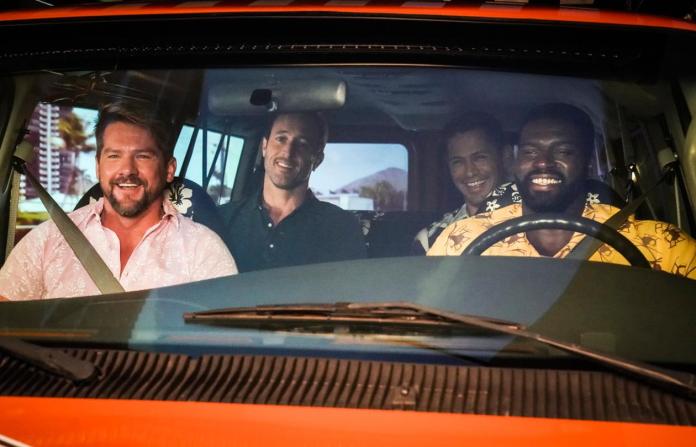 But, all in all, Steve and Thomas worked together well, and by the end, came to have a mutual respect.  It was cool that Thomas recognized the photo of Joe White in Steve’s office and, like with Rick and TC in the van, it showed how connected they really all are as “team guys”.  I really hope we get to see them get together for that beer someday.

The next best team up of the night was Tani and Higgins.  These two are like kindred spirits. Tani thinking being a spy would be cool and Higgins immediately sensing the closeness between Tani and Junior.  I really liked how Higgins told Tani about the MI6 agent she was involved with (a story we previously saw unfold on Magnum) and giving her the advise that if she can find happiness with someone, even if it’s someone she works with, she should go for it.  It’s been such fun all this season to watch Tani and Quinn bond, having it happen between Tani and Higgins was icing on the cake.  And how adorable was Tani, all nervous and tongue tied, asking Junior out? 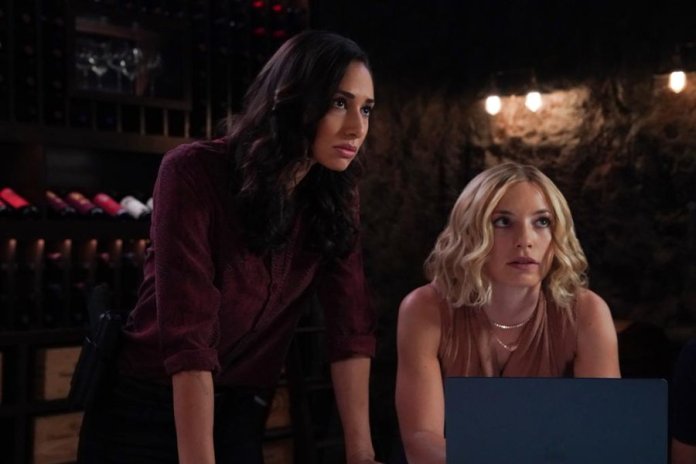 There were so many great lines and scenes in this episode it would be impossible to highlight them all unless I sat here and transcribed the entire episode!  🤣 The scene in HQ when Steve and Thomas return was a particular highlight.  The entire scene was hysterical.  Rick and TC gushing over Steve had nothing on Lou trying to pump Steve for information on how awesome it was to drive the Ferrari and Steve’s whispering “I’ll tell you later” was adorable.  Then Lou tells them about how Steve was tortured in the sensory deprivation tank, an story Quinn never heard about either.  But the best part?  Lou asking Tani and Quinn if the bickering between Thomas and Higgins reminded them of anyone, Steve denying (without even having to guess who Lou is talking about) that it didn’t resemble he and Danny in the least, and the look between Tani and Quinn when Tani disagreed with him.  30 seconds of pure perfection.

Best past? Tani disagreeing with him and Quinn sharing a look with her 😂😂#H50 #H50xMagnum pic.twitter.com/lF598Z9x9P 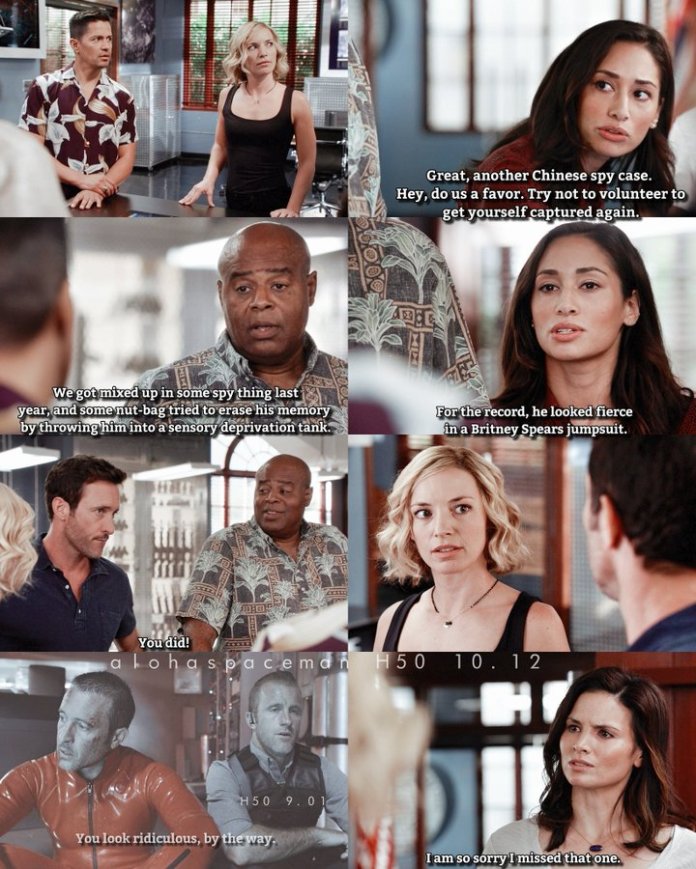 This was a fantastic one-story episode, with everyone working one case.  Just the way I love an episode to be.  The only deviation was a small scene between Tani and Adam with Tani trying to understand why Adam is behaving the way he is and trying to convince him that he has family, people he can rely on.  It was a very short scene, but it was really heart breaking. 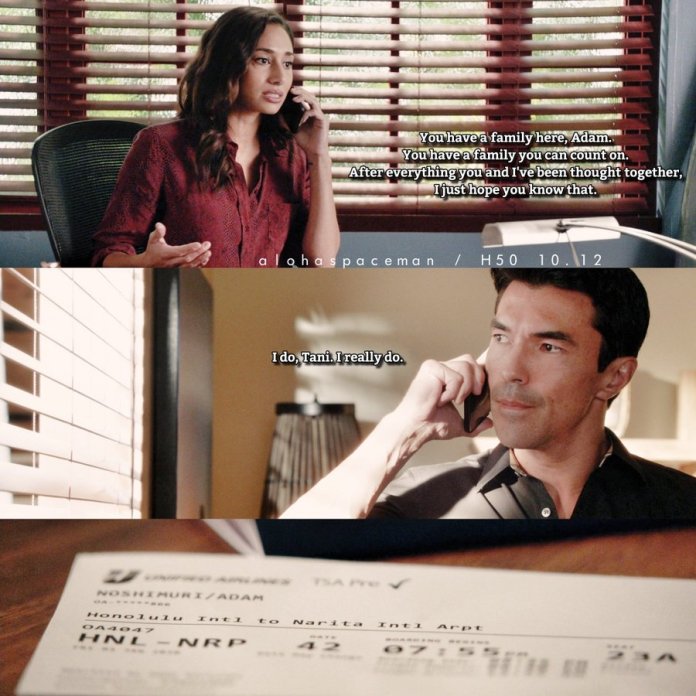 I would have loved for it to be a full crossover, like the H50 hour was but it’s understandable that Alex, who already works a full 25-episode season, didn’t want to be committed to do a 26th full episode.  It does make you wonder what army descended on Five-0 that could contain the entire team, especially Steve, though! 🤣

Meagan was awesome throughout the entire Magnum episode.  She was totally bad ass, was incredibly scared and desperate but until she gave a beat down to that moron who deleted the NOC list, she managed to be stay pretty focused.  I did love how she threatened to burn Kamekona’s shrimp truck if he didn’t give them the SD card Steve told him to protect.

The reunion scene between she and Junior was fantastic. The relief and the love between the two of them jumped off the screen.  No kiss?  Nope and I’ll tell you why.  Like I said at the beginning of this review, there are undoubtedly fans of H50 who don’t watch Magnum and didn’t want to watch it on Friday, even as part of a crossover.  Those H50 fans would be invested in the Tani and Junior relationship and would be really upset if the long-awaited kiss happened on a show they don’t watch, making them miss it. 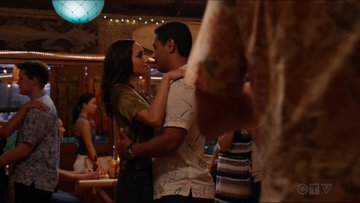 That’s what happened when H50 crossed over with MacGyver.  That crossover wasn’t a true crossover like this one, in that there weren’t two episodes covering one story.  It was just a weekly MacGyver episode that Chin and Kono happened to be in.  It was in that episode that Kono casually mentions to Jack and Mac that Madison Gray, a storyline that had run on H50 for several months, was dead.  H50 fans who didn’t watch MacGyver totally missed the denouement of that story and were justifiable upset about it.  This was perfect.  We’ll get that Tani and Junior kiss, but we’ll get it on Hawaii Five-0, where it should be.

I liked how the episode ended with everyone at Rick’s place for drinks, dancing and darts. I loved the flirtation going on between Quinn and Rick (can we dare ship “Quick”??). Who knows, maybe the next little crossover will be a Rick mention on H50 about the two of them meeting up for a drink or vice versa on Magnum.  The only thing that would have made the end better is if Steve, Danny and Lou, having been released, had joined everyone else at Rick’s place to celebrate.  Oh well…. maybe next time. 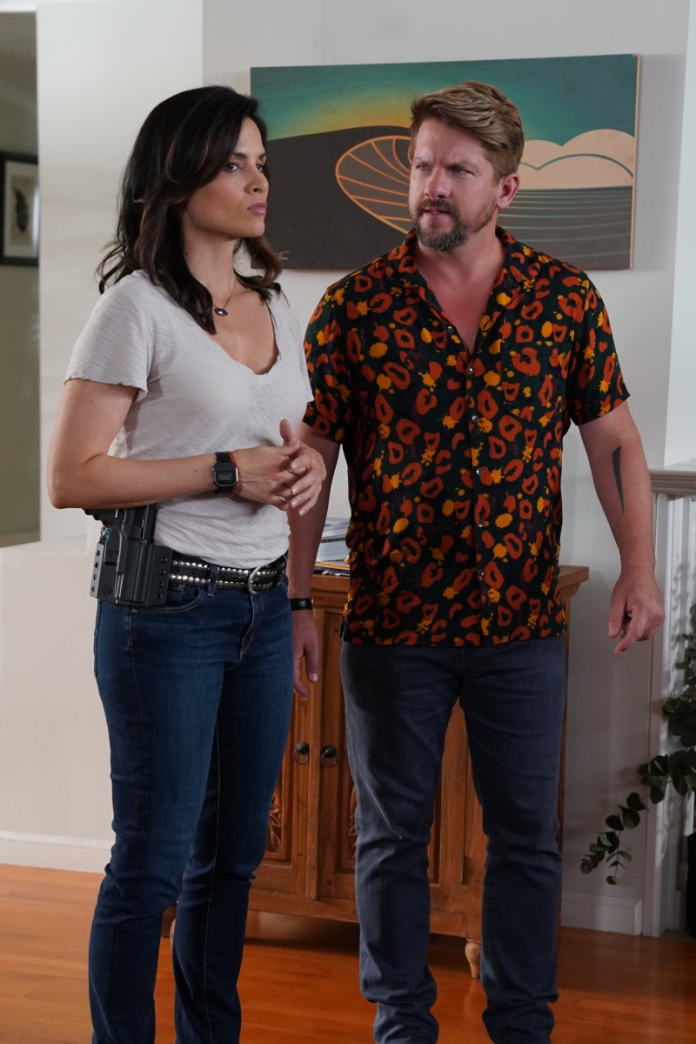 That’s it for this week gang.  Please feel free to comment on all your favorite moments because, like I said, there were just too many to list them all.  Have a great week.  Aloha. Malama Pono.

Super distracted this weekend and now, not feeling too well, so no screen caps from me this week.  Pictures above have their photo credits noted.