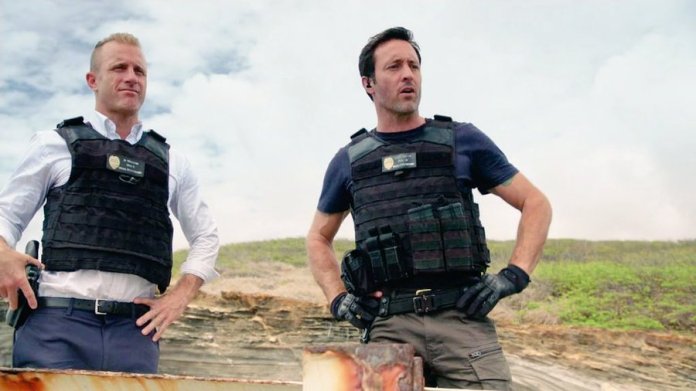 Well hello there, my friends!  Before we begin our review of this weeks H50 episode, I wanted to thank everyone who helped carry the ball here while I was enjoying everything that went along with my daughter’s wedding.  The week leading up to the wedding, the entire wedding weekend and the wedding day itself was absolutely perfect.

I can’t imagine a more beautiful wedding day. Everything went off without a hitch. Even the weather cooperated.  The day started off with pretty much constant downpours and we thought everything we’d planned for outdoors would need to be moved inside.  But by some miracle, the rain stopped, the clouds lifted and by ceremony time, the sun was shining brilliantly.  The bride was stunning, the groom beamed with happiness, parents were full of pride and everyone had a fantastic time.  It’s a day none of us will ever forget.

Of course, a TV show, even one I adore as much as I do H50, was far from my mind.  I was finally able to watch both episode 10.04 and 10.05 days after they aired, and I really appreciated the comments in here which helped me enjoy what was to come when I did get to watch.  It made finally watching the episodes even more enjoyable. Thank you all for the helping hand.  You are all the best!

Now… time to get back to the beach…..

I was full of excitement to be able to sit back, for the first time in three weeks, for a relaxing Friday night with my feet up, a glass of wine in my hand and my favorite TV show.  Naturally, I enjoyed the episode for the most part, because, well, I’m me and I love seeing all my favorite characters together on my TV screen.  But to be honest, I found the episode a bit of a letdown.  It’s pretty obvious this was meant to be a filler episode, somewhat of a breather for everyone involved and deliberately lighthearted.

Over the years, we’ve had many episodes like this one.  They’re mildly entertaining but usually not as funny as the writers seem to think they are.  Three middle-aged goof balls acting like assholes during Spring break and finding a dead body in their hotel bathtub leaps to mind.

Most of the time, these extreme filler episodes act as a lighthearted bridge to a subsequent episode that could be anything from heavy drama to fast and fierce action to downright heartbreak.  These subsequent episodes are usually a highlight of a particular season.  For example, “Ho’amoano” (S5-E22) with the three stooges preceded “Mo’o ‘olelo Pu” (S5-E23) where Kono sets off on a solo sea journey in honor of her mother only to be lost at sea after a violent storm.

Like all filler episodes, there were things to like in this one and what I liked best was the partnering of Tani and Quinn.  Cagney & Lacey… Rizzoli & Isles… Season 1 Steve and Danny…. Tani and Quinn time is absolutely golden.  As I wrote in a response on a previous review, I’ve always loved when the writers team up the women on the team.  That is, the few times we’ve actually had two women on the team at the same time.  I loved Lori and Kono together and also when Kono and Catherine worked together. It didn’t happen all that often, but I always liked it when it did.

I also like how the two of them, working cases, driving around, bantering back and forth, feeling each other out as they get to know each other better feels a lot like how Steve and Danny were when they first partnered.  Quinn, the more stoic, military minded partnered with the more quick witted, sarcastic Tani.  I’m really enjoying watching them work together and forge not only a partnership but a friendship as well.

I do wish the writers could have come up with a better way to tell their part of this story though. The premise of their case was actually interesting. The revolving door of suspects in Marion’s murder was pretty funny on its own and the “nosy neighbor” was hilarious. 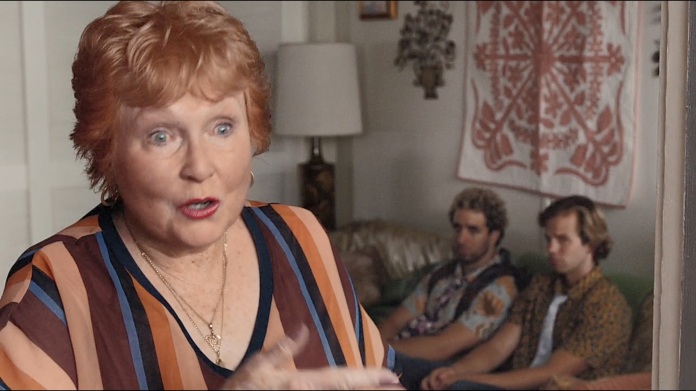 I think the story could have been very entertaining with Tani and Quinn alone working the case, dealing with all the suspects and the ridiculousness of the situation without the addition of the two YouTubers who were, quite frankly, annoying as hell. 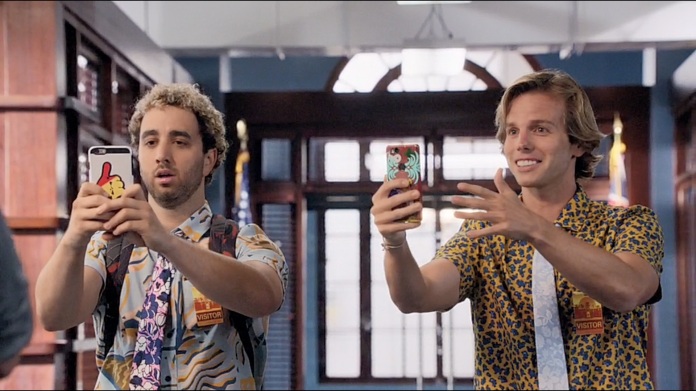 I know I’m of a totally different generation, but the YouTube phenomenon of “influencers” is totally lost on me and I had no idea, until someone filled me in, that these two guys are real people.  Not just actors playing parts.  From what I’ve been told, they are real life comedians, Tom Allen and John Parr, and they run some sort of podcast, I think.  I suppose I could Google them or search YouTube, but personally, I really didn’t care enough to go look.

Like I said, I’m probably too old to get it anyway, but not everyone who watches this show is my age so the attempt to bring a younger aspect into a story is not really a bad idea.  What I found annoying and unrelatable, is probably easily understood and enjoyed by a younger generation who know exactly who these young men are and spend time on YouTube being “influenced” on a daily basis.  Just because it’s not my brand of Tequila doesn’t mean others won’t find it fun.  To each his own.

I will say that I really enjoyed the ending though, with the frat-boys posting their HPD recruitment video with the Tani and Quinn doppelgangers.  The boys club of Steve, Danny, Lou, Junior and Adam standing around just waiting for the two of them to show up so they could proceed with their friendly teasing was perfect.  I loved the reaction of Junior when Tani called him “Reigns” (“She only says Reigns when she’s really angry” 🤣 🤣) and their total embarrassment at their portrayal in the video was hysterical.  Those last three minutes pretty much made up for the rest of this story.

The main crime of the week was unique, something, ten years into a series, must be hard to do.  I thought the auto-drive car was a brilliant idea and I particularly liked Julia, the programmer, taking out all the bad guys with the car to save her father, Micah.  I don’t know which was better.  Steve, Adam and Junior storming in to save the day only to find that Julia had already taken everyone down or the look on Lou’s face as he watched Julia perform her computer magic.  Like with Tani and Quinn’s story, these last few minutes made this story as well. 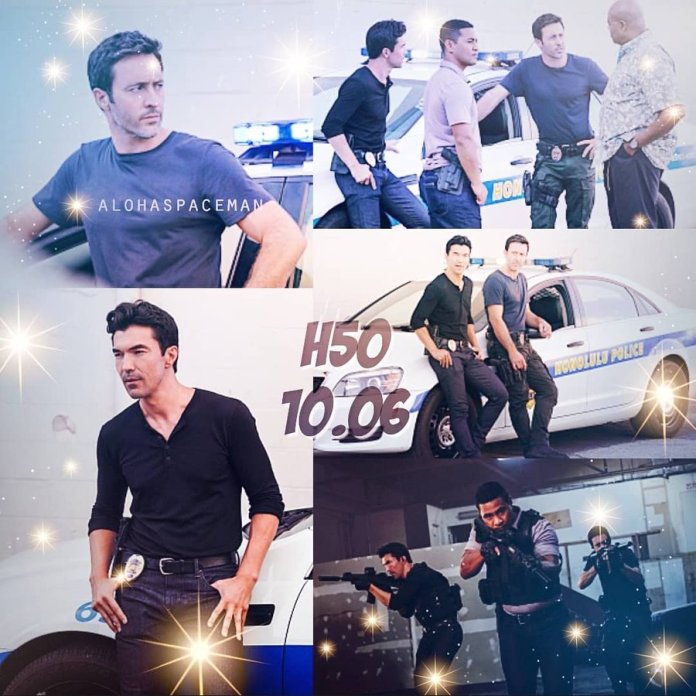 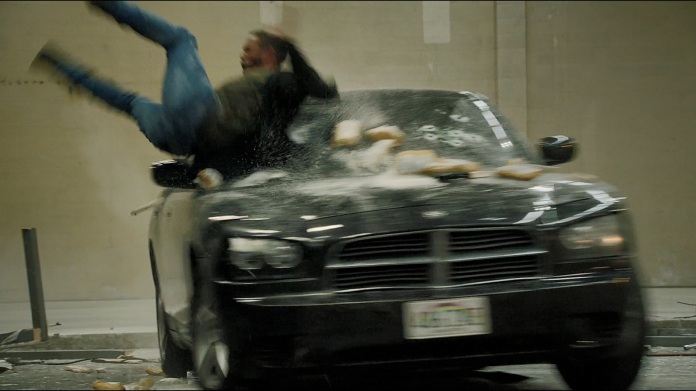 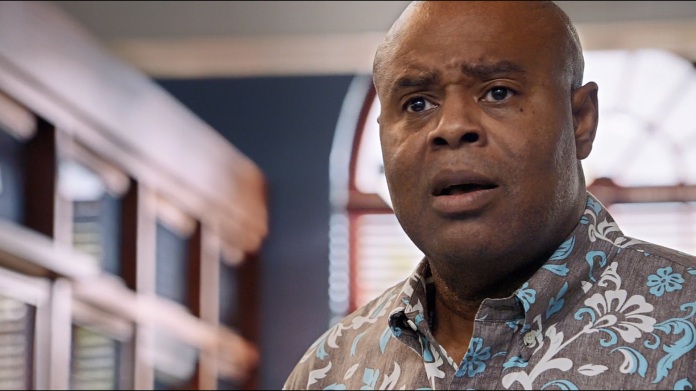 We actually managed to have a nice little Steve and Danny cargument in this episode too.  You know I always love whenever we can get these two together in the Camaro to work their magic.  It’s always fun when the guys remind us that they are just like us.  We park ourselves in front of the TV to watch our favorite crime fighters and so did they.  CHIPs marathons and now Knight Rider references.  I loved when Danny called the car they were following “Kitt”! 🤣 🤣

I do have a bone to pick, however.  You know I’m not one for much complaining, but I have to say it does bother me when, for no reason whatsoever, Danny simply disappears from an episode.  It happens relatively often these days.  I totally understand and came to terms with Scott’s shortened episode schedule years ago and have no problem with it.  I’ve also come to terms with the fact that Danny sometimes just isn’t in a scene where I think he should be.  I’m less ok with that, but I’ve come to expect it. I’ve always said if this is the way it has to be, I hope the writers would manage to, at least, make the most of the time he is there.

Danny was involved in the crime of the week throughout the whole episode.  He was there at the beginning with the remote controlled car was first stopped.  He was part of all the magic table exposition and he was with Steve in the Camaro for the money drop and the subsequent car chase and cargument.  So far… so good. 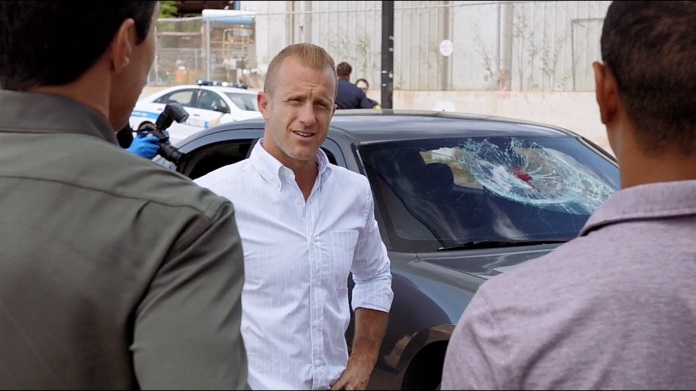 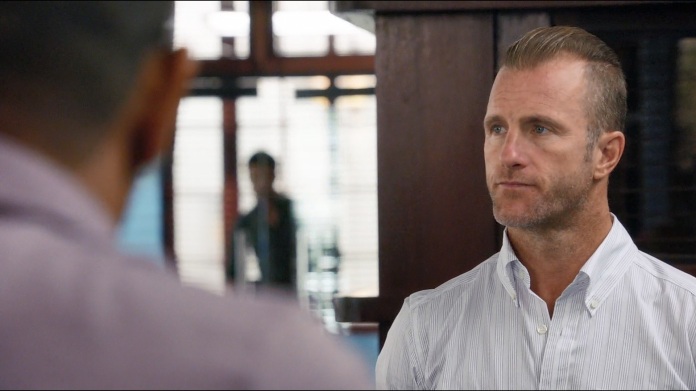 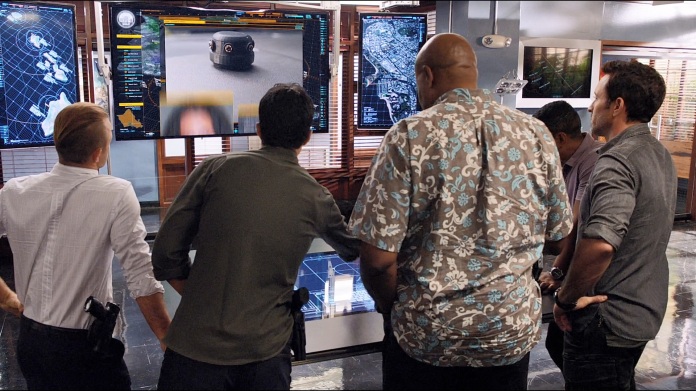 So why did they find it necessary for Danny not to be part of the drug dealers bust? I understand Scott was probably not on island when that scene was shot but why couldn’t they just shoot the scene when he was on island?  There are any number of scenes in every episode that Danny legitimately has no part in. Like every single scene of the Tani/Quinn story in this episode.  Shoot those when Scott is off island and make sure you take full advantage of every single moment he is there.  As we’ve said before…. quality if you can’t have quantity!

I’m holding out all kinds of hope that Danny will be fully present and there for Steve during and after the upcoming episode next week.  Considering that Alex, himself, wrote the episode and Alex has always said that, to him, the most important relationship in Steve’s life is Danny, I’m hoping we’ll get to see that play out in spades.

So, there we have it.  This episode had some good car chases, a great fiery explosion with a car flying off a cliff, some awesome technical mumbo-jumbo, awesome Tani and Quinn time and a great McDanno cargument.  The rest?  Well… did I mention next week’s episode is sure to be epic!?!?!

Have a great week my friends.  Aloha. Malama Pono

Several of the screen caps are mine but most are not.  Mahalo to @ernsand2, @alohaspaceman, @sabkay_1893, @katrinalaw, @kimeebalmilero and CBS for the use of their photos, gifs and clips.