Personal note:  Due to a death in the family, I didn’t have time for a full review this week.  I’ve tried to hit the highlights as best I could here today.  Please feel free to add any and all comments to the blog as you’d like.  This week, this review will be more yours than mine.  Please have fun with it.  I’ll check in and respond as I can. Aloha.

As always, this being H50, you know I’m going to pretty much love every episode.  This week, the case of the week, for me, wasn’t really all that interesting.  Perhaps it’s because my mind wasn’t as completely engaged as it usually is and with everything going on with the family, I haven’t had the time to even re-watch the episode yet.  But, I was talking to a friend earlier and she put the COTW in perspective for me.  This is how she described it and I have to say, hearing it from her point of view, I realize how much I actually missed and can’t wait to have to the time to go back and re-watch the episode properly.

“Re-watching for the plot I found the story more compelling.  For much of the episode everything pointed to an attempted gang takeover.  There really aren’t that many motives for crimes when you boil it down.  Money, power, passion, revenge, insanity are the ones I can think of.  Eight seasons of any show is going to have hit on most of them.  The fact it’s usually the father is probably accurate.  They see themselves as the protectors.  The ones whose duty it was to keep the family safe.  In this instance, I think a huge additional guilt factor came into play.  This guy may not have been able to keep his son from getting killed but he allowed himself to be coerced into keeping quiet about it.  That would eat at your soul.  I think that’s probably what really drove him while, at the same time, made him fearless in going into what should have been certain death situations.  If he hadn’t survived at least he wouldn’t have to live with himself any longer.  In my opinion there was no way he wasn’t going to pull that trigger and shoot the son.  He’d already murdered the father and all his “soldiers”.  He may have been wishing Five-0 would take the shot and end his pain.”

For me though, what made this episode enjoyable was the presence of MI6 agent Harry Langford (Chris Vance).  Or should I say, ex-MI6 agent Langford?  It seems Harry decided to put his government pension and his substantial gambling winnings to good use and retire to enjoy his “golden years”.

I think I made the exact same face Steve did at the term “golden years” applying to someone who’s only 45 years old.  If that’s the case, I should have been allowed to retire twelve years ago!  So, I can totally understand Harry’s desire to travel the world.  I was also really happy to see that Harry has a new lady, happy to see him moving on with a new love.  Just like Steve did, it’s time to move on from heartache & enjoy life again.

As seems to be the recurring theme as of late, retirement isn’t all it’s cracked up to be for some people.  I was a bit confused as to why Harry showed up on Five-0’s doorstep looking to help out on their current case when he was in Hawaii having fun and enjoying the company of his beautiful new lady love.  But, I suppose when you’re used to saving the world on a daily basis, high priced hotels, private jets and beautiful locales can get a bit boring.  Mind you, I am so totally ready to be incredibly bored… but I digress.

There were three things that really made this episode for me.  The comradery between Steve, Danny and Harry, which was priceless from beginning to end, the seamless integration of Tani onto the team (remember this was supposed to be episode two not episode three), and all the Steve/Danny moments throughout the episode.

Beginning with the watery hug Harry gave Danny all the way up to the guys watching Harry and Veronique’s romantic shrimp dinner at Kamekona’s, these three were a joy to watch for the entire hour.  Harry integrated into the team so well, he was bad ass in the back of the weapons van, outnumbered something like three-to-one and his 007 personality throughout the episode was as much a breath of fresh air as it was the first time we met him.  I sure hope Harry decides to spend time in Hawaii again someday. 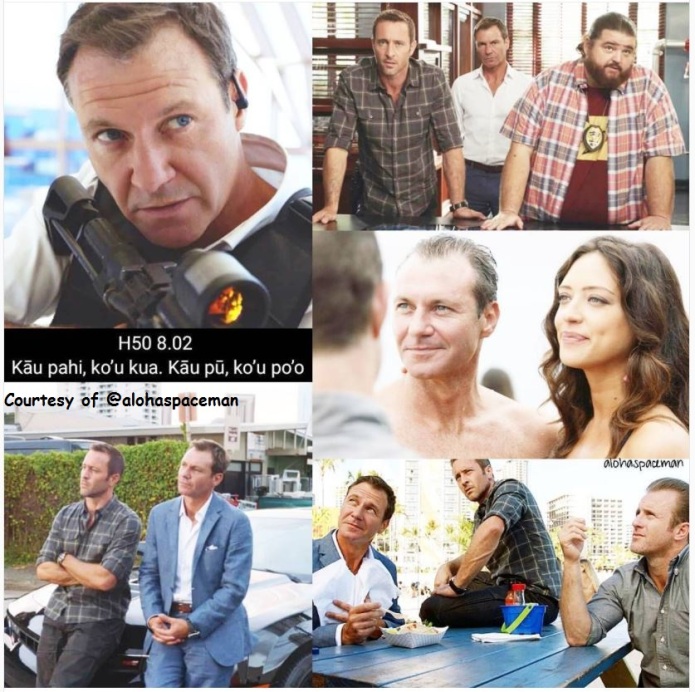 Tani’s participation in this episode was really great. At first it seemed a bit odd to point out how great that shiny new badge looked on her but then I had to remember, again, that this was supposed to be Episode 2.  I really liked her teamed up with Lou at the piano teacher/killer’s house.  She handled herself like a seasoned pro and I really don’t think she needed Lou to tell her that this time when she shot someone she needed to make sure they “didn’t get up”.

The ongoing restaurant project was on full view here too.  Watching Steve’s face as he tried to figure out which of three pretty much identical reds to pick for the booths in the restaurant was hysterical as was the moment Danny told him he’d already ordered the garnet anyway.  I can’t tell you how many times over the years my husband has said to me, “Why did you even ask me if you already decided on what you wanted”?  To which I always reply, “I at least want to give you the illusion that you have a choice, dear!” 😊 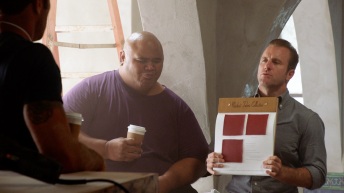 I couldn’t help but smile watching Steve working the wood counter with that sander in the first scene.  It reminded me of the pictures I saw of Alex helping his friend Egan renovate his gym a few years ago and the fact that Alex is a pro at renovations at his own home.  And with Kamekona there watching him work, it reminded me of the Season 1 episode when Steve was fixing his house after the General Pak incident.  I couldn’t help but wonder if Kame got him a “special deal” on the wood again and if he was sitting on Steve’s phone.

But, of course, the best moment in the entire episode for me was when Kame showed the guys the T-shirts he had made for them.  Ok…. so, it’s an Italian Restaurant and not a “Bar & Grill” Kame but, oh my God…. it says “McDanno’s”.  I think the earth may have given a shudder from the vibration of millions of McDanno fangirls squeeeeing all around the world! 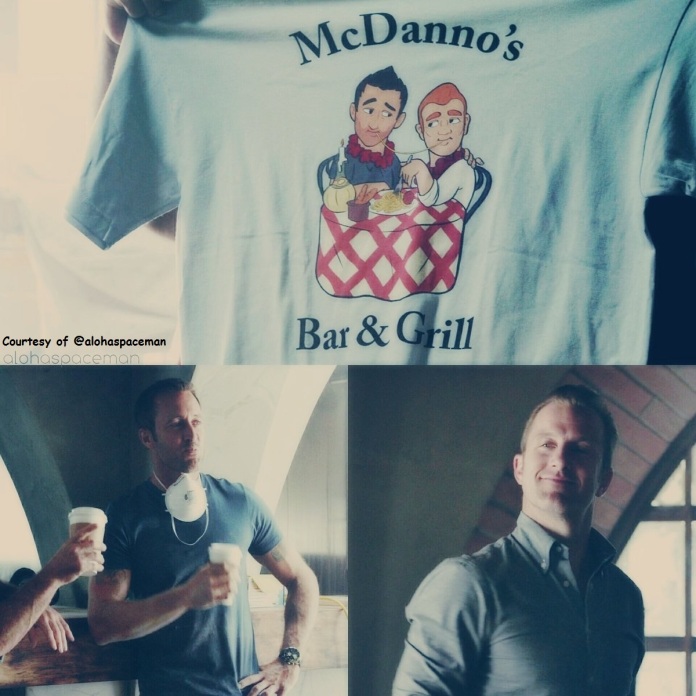 I don’t know what TPTB were going for by having Kame make up those shirts.  You guys know me long enough to know I am a McDanno shipper at heart and while I’d love it if Steve and Danny were a real couple on the show, I know that probably won’t ever happen.  I’m hoping what the writers were saying is that the deep friendship and brotherhood between Steve and Danny is going strong and even with the stresses of trying to get the restaurant off the ground, these guys are a solid team and will always remain so. 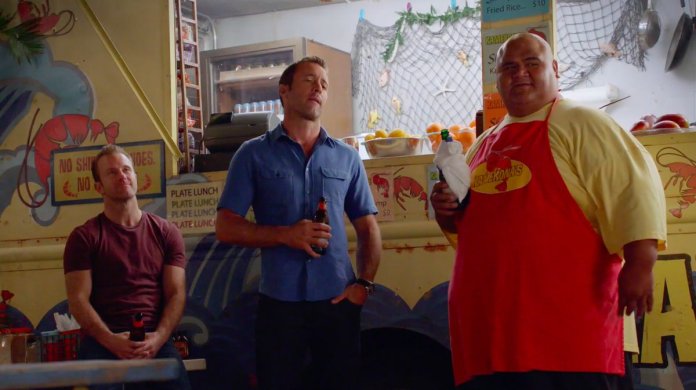 People have seen the connection between these two since the very beginning.  Harry can see how their “constant bickering clearly comes from a place of love”.  He can understand the two of them starting a restaurant together, having it be a plan for retirement so they can do it together because they “can’t bear to be apart”.

Oh yes…. the McDanno was strong in this episode.  I could just kiss every one of the writers for using “our” shipper name to say it.

As far as the restaurant itself goes, I’m beginning to feel the more scenes there are with people constantly telling Danny & Steve not to open a restaurant or about all the problems associated with it, etc. and even though they messed up their first joint dinner for Harry and Veronique, the more I think theirs will end up being a success!  We’ve seen Danny prepare wonderful meals for the Ohana.  We’ve seen Steve prepare wonderful means for both Lynn and Alicia.  These guys just need to work around their individual egos and let each other do what they each do best and the restaurant will be a great success, just like their partnership has always been.

Well, that’s it for this episode my friends.  I’m sorry this review isn’t as detailed as usual but I did the best I could with limited time. I’m not even sure how coherent it is since I wrote most of it late into the night when I couldn’t sleep.  I know there is a ton more to discuss with regard to Harry and Tani and especially between Steve and Danny.  So, please, feel free to fill the comments with everything I missed.

I also had very little time for screen grabs since I haven’t re-watched the episode yet.  I managed to grab a couple but for the most part, pictures used above are.  Those used here are mostly courtesy of CBS.  I’ve given credit to those who’s work I borrowed.  If you recognize something that is your or belongs to someone else, please let me know in the comments and I’ll update the blog to give proper credit.