Hello all my friends!  I hope you’ve all had a fantastic summer.  As Labor Day weekend is upon us, it’s time to get the kids back to school and start to think about putting away the deck chairs and the pool floats.  I love fall, with cooler nights and the ever-changing colors of the leaves even if I’m sad the days of laying out in the sun and picking tomatoes in the garden are pretty much over for another year.

But, September also brings the start of new seasons of all our favorite TV shows.  The return of the CBS Friday Night Crime Block of MacGyver, Hawaii Five-0 and Blue Bloods, is scheduled for Friday, September 29th and I know you, like I, can’t wait to see the newest season of our crime fighting team and Ohana back in action in Hawaii.

Of course, this past summer has been a tumultuous one for H50.  With the departures of Daniel Dae Kim and Grace Park our Ohana is going to look extremely different when the new season hits the starting line.  There has been much discussion about the how’s and why’s but, truth be told, we will never know what happened behind closed doors and why certain decisions were made.  We will never forget Chin and Kono and what they brought to our team and their Ohana.  They were instrumental in the building of the Task Force and were vital cogs in what made it work so well.  But now, what’s done is done. It’s time to move on.

In life, it’s not uncommon for family members to leave the fold.  Kids grow up, get married and/or move away.  There are relocations for jobs and, unfortunately, there are deaths.  The remaining family members don’t ever forget their departed loved ones, no matter the reasons for the departure.  But sometimes, new people come along and manage, over time, to become part of the family.  These new people will never “replace” those who are gone, but can become just as vital to the working mechanism of the family as those who left once were.  The departed will never be forgotten but that doesn’t mean those new members can’t be embraced and welcomed into the loving family.

As Season 8 of H50 begins, we welcome our newest team members to the Ohana.  Tani Rey and Junior Reigns.  Of course, they will never “replace” Chin and Kono but I’m sure, in time, they will adequately fill their shoes.  I’m looking forward to seeing them grow into Five-0 elite.  I’m looking forward to watching another rookie grow and blossom under the tutelage of Steve McGarrett.  I’m also really looking forward to having another SEAL on the team. I can’t wait to learn their stories and see what new adventures having new characters can bring to the show.

One thing I’m really looking forward to more than anything is the continued relationship between Steve and Danny.  I’m hoping to watch Danny take Tani under his wing to try to “protect” her from being “contaminated” by Steve’s “craziness”.  I’m looking forward to his reaction to having another SEAL on the team, albeit, one who, from what I’ve read so far, is more inclined to follow the rules then blast right through them.  I can’t wait for the addition of “Eddie” the Military/Police dog Steve is going to adopt and Danny’s reaction to that.  His “testosterone filled marshmallow” “half-baked cookie” rescuing yet another broken toy.

But it’s these two men, these brothers, continuing the relationship they began all those years ago in the McGarrett family garage I will always love the most.  Season 7 saw the writers moving away from the bitter sniping between these two and move toward a return of the good-natured banter of old.  I’m looking forward to watching that continue.  The idea of them working toward their retirement dream of opening a restaurant together will be perfect fodder for these two battling Bickersons and I, for one, can’t wait for a front row seat to the fireworks!  I also want to see the loving side of these two guys.  Steve’s still being treated for radiation poisoning, after all, and as much as I love “Danny Danno” with the kids, I think I love “mother hen Danno” just as much.

I’m also very curious to see how the new dynamic of the show is going to work now that there are so many main characters.  Now that Kamekona, Noelani, Duke and Adam have all been promoted, how will they be integrated more into the fabric of the show.  Well, all of them, except for Adam, already have defined roles within the story so I’m assuming those roles will simply be expanded more to give them more screen time.

But it’s Adam I’m the most curious about.  With Kono gone, what’s Adam’s purpose going to be?  Is he still on probation and that’s why he hasn’t left to join Kono on the mainland?  We heard he’s going to “join the team”.  Does that mean with a badge?  How? He’s a convicted felon. Or will it be more on a consulting level, like Jerry?  And what about him and Kono?  How is he coping with her just up and leaving like that?  Have he and Kono broken up?  I sure hope not.  They’ve been through so much I hope someday they finally get their happy ending.  Yeah, there are a lot of questions concerning Adam.  I’m looking forward to seeing how the writers are going to handle his character.

I’m also really curious to see how they’ll handle the opening credits.  Up to now, they had the main six (seven) characters featured in the opening. Steve, Danny, Chin, Kono, Max (until he left), Jerry and Lou.

Now there is Steve, Danny, Lou, Tani, Junior, Jerry, Kamekona, Noelani, Duke and Adam. That’s TEN. I’m figuring they still do the grouping as before with Steve, Danny, Lou, Jerry, Tani, and Junior getting the main picture spreads with the other 4 grouped together in one. But, what do I know?? LOL

So, are you guys excited for the new season as much as I am?  There’s more I could write here but I want to open this up to you guys.  What are you looking forward to the most?  What are you hoping to see down the line?  Let’s hear all your wishes and desires!  I’m sure Season 8, while quite different, will have all the elements we’ve always loved and will give us another wonderful year of great crimes of the week, car chases, explosions, hand-to-hand combat, laughter, tears and, as always, Ohana.

For those too young to understand this reference (as a matter of fact, I’m too young, but I remember my parents telling me about it), “The Bickersons was a radio comedy sketch series that began September 8, 1946….The show’s married protagonists, portrayed by Don Ameche and Frances Langford, spent nearly all their time together in relentless verbal war.”  By the way, it was a comedy and ran for several years on both radio and TV.

So the concept of “married” couples bickering and bantering is not a new one and not something the writers of H50 came up with on their own.  It’s a tried and true comedy trope that people have loved for over half a century.  It seems the 8 – 10 million viewers H50 has been drawing each week shows that the vast majority of viewers still enjoy it.

BTW, as I was typing this, SpoilerTV posted the CBS Press Release and Promotional Photos for the Season 8 premiere!  8.01 – “‘A’ole e ‘ōlelo mai ana ke ahi ua ana ia” is Hawaiian for “Fire Will Never Say that It Has Had Enough” 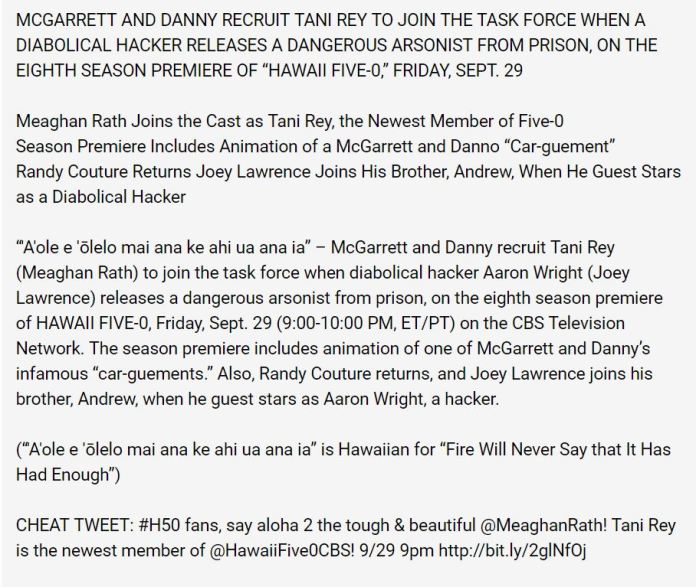 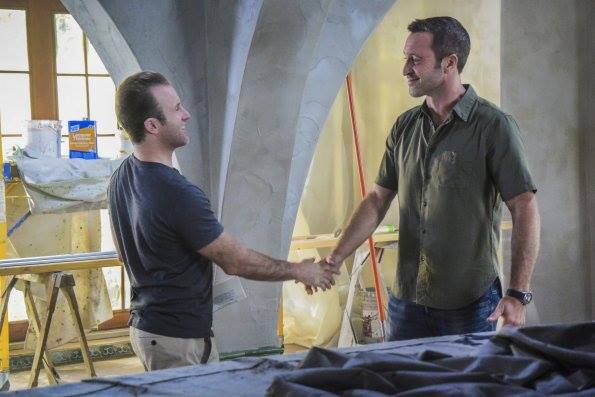