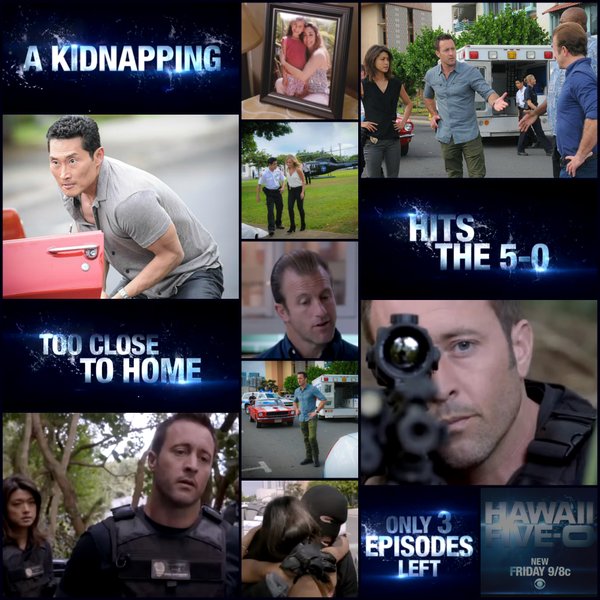 Oh, I so hate the idea that this wonderful season of Five-0 is coming to an end.  This episode was a great set up for what looks like a wonderful 2-hour finale night next Friday.  It gave us a wonderful twist and a great stepping stone to understand what is coming next.  But before I get into that, let’s talk about the B-side of this episode first.

My feelings about Gerald Hirsch in this episode are torn.  On the one hand, I find his rehabilitation of himself interesting and I like seeing another familiar face every once and awhile at a crime scene.  I like that he chose to do something productive with his life and I like his interactions with the team.

I liked having Hirsch find the “safe room” and his being injured by the thief as he made his escape was a nice little touch at the beginning of the episode to tie into the crime of the week.  I also enjoyed his interactions with Kono.  Kono’s facial expression when that curtain was pulled aside at the hospital was priceless. 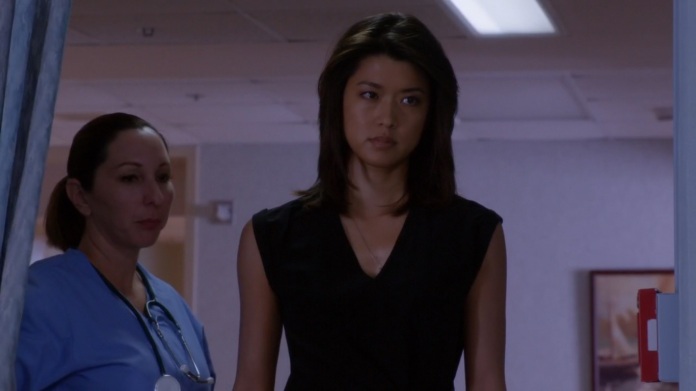 It was totally understandable why Kono would not look favorably on having to baby-sit Hirsch for his own safety.  Hirsch has never hidden his enormous crush on Kono, not from the first moment they met, and considering the age of this man, that in and of itself is a bit weird.  Having a painting of her hanging over his bed, as if she’s watching over him as he sleeps is, admittedly, really creepy.

But Kono can see beyond those things. She can see something else because she is a woman of intelligence and compassion.  She does not like the way Hirsch acts toward her in the least but she also realizes he is a sad, lonely man who is simply clinging to an innocuous fantasy that really does no real harm.  She deals with him in a mature, insightful fashion without needing to hop on a soapbox of indignation and act like she has a stick up her ass.  The way she deals with Hirsch shows her good heart and shows she is as beautiful on the inside as she is on the outside.

Guest star Elliott Gould was wonderful as Hirsch Sr. and the fact that he’s as big a flirt (for want of a better word) as his son made understanding Gerald a little easier.  I loved how he told Kono that he knew exactly what his son had done with his life and how he asked Kono to look out for him.  I was touched, like Kono was, when Gerald told her how he was just now beginning to build a relationship with his father after the death of his mother.  I really liked how they bonded over their parents and the hardship involved in caring for an aging parent.

Now this is where I’m torn.  I really did enjoy all of these scenes and I’m glad they were part of the episode but, at the same time, I kind of wish they weren’t.  I’m not sure if I can make this sound like it makes sense.  The rest of this episode was really good and I would have loved for more time to be devoted to it.  That’s the part of me that wishes we would have cut away from Hirsch once he provided the composite of his attacker and the team knew he was safe.  But I loved seeing compassionate Kono and her scenes with Hirsch and his dad at the end.  But, once it was known he was safe, the rest of the story really didn’t serve any purpose other than those feel good moments.  So yeah…. completely torn!

And it’s not just a matter of the time taken away from the main story, but here’s another instance where the B-side story took a member of the team away.  Kono was apart from the team for almost half of the episode and that’s the kind of split episode I like the least.

I do understand though.    25-episodes a year of high octane, action packed, full team stories would wreak havoc on the cast, especially Alex.  If this were a cable show, with 13 or 15 episodes per year, it would be easier for each and every episode to be exactly the way we’d love it. Full team, full one-case story, perfect.  But with 25-episodes to fill, we need the secondary stories and we need the secondary characters to fill out those stories.  It makes a 25-episode season more well-rounded and more enjoyable and I’m sure the main actors are thankful for more manageable days and the rest these secondary stories afford them.  And, I’d really hate it if we only had 15 episodes a year. More powerful episodes or not, that is simply not enough Five-0 to keep me happy.  I’ll take it just the way it is, thank you very much. 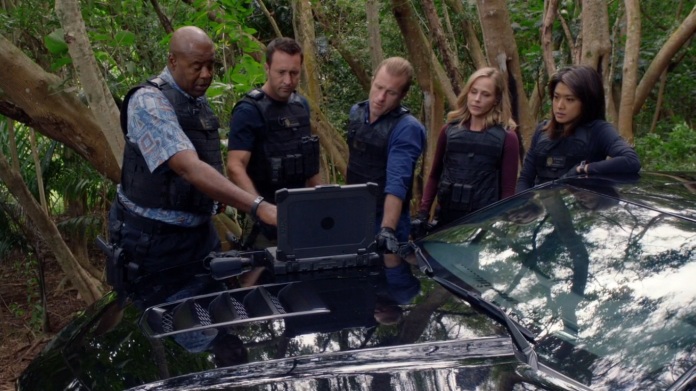 This week’s crime of the week, as many do, started off looking like one thing and ended up being something else.  What started off being a robbery gone bad turns out to be a murder of the worst sort.  A vendetta that takes the life of an innocent woman and leaves her young daughter motherless.  A continuation of the vendetta which almost cost Adam his life a couple of weeks ago.  A vendetta orchestrated by our newest villain… Michelle Shioma.

I think I can really like this new villain.  First off, how awesome is it that our new baddie is a woman? And what a woman.  She is simply….. ICE!  I don’t think it’s ever been mentioned and, of course, I don’t know for sure, but my guess is that Goro Shioma didn’t have sons and he raised his daughter as he would a son to be the heir apparent.  She said before that her father hadn’t been running the day to day operations for quite some time so she is not new at this game at all.  This ice queen is going to be a formidable opponent.

This woman is ruthless and heartless and she is out to kill Gabriel and anyone else who gets in her way.  She had a city bus full of prisoners blown up without blinking a finely mascaraed eye, killing and mutilating several in an effort to kill Adam just because he had a meeting with Gabriel.  She had Vanessa Diaz murdered in her own home because she was Gabriel’s wife.  And she may present herself as a well-to-do soccer mom but she has no hesitation in kidnapping little Sarah to draw out her father.  Yes, ruthless and heartless.

It was heartbreaking to hear little Sarah tell Chin that she was named after her aunt Malia.  The look on Chin’s face showed that even though he’s done his best to move on he won’t ever get over losing his first, greatest love.  There isn’t any way Chin, or the entire team for that matter, wouldn’t protect that child no matter who she was but having her be family solidified it even more.  It’s almost like a small piece of Malia has been given back to Chin to cherish and protect.  I love this development.

I haven’t had the chance to read any other blogs today (you know I really don’t like to do that anyway) so I don’t know for sure, but I’m willing to bet I’m not going to be the first to laugh at the amazing recuperative powers the Five-0 team seem to possess.   Two through-and-through gun shots, one in the shoulder and one in the abdomen and yet, Chin is able to haul himself out of a hospital bed and join the team for the pivotal take down. 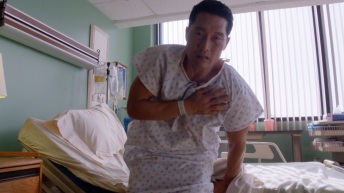 Let’s not talk about the fact that he even got up at all.  Because, even before he could get up, he needed to disconnect himself from all the beeping and chirping machines at the hospital.  Machines, I know for a fact, are monitored at the closest nurse’s station.  So, he pulls off all the leads causing the machines to “flat line” and no one even notices?  Of course they didn’t because then he wouldn’t have been able to be part of the triple threat of snipers to take down the jerks who snatched Sarah.

Casting did a fantastic job on the actress playing little Sarah.  She did a wonderful job in every scene.  The chemistry between she and Daniel Dae Kim was obvious and I had no problem believing them as family.  A fact I hope we see a lot more of.  She even looks a little like Malia which, I’m sure, rips Chin’s heart out even more. 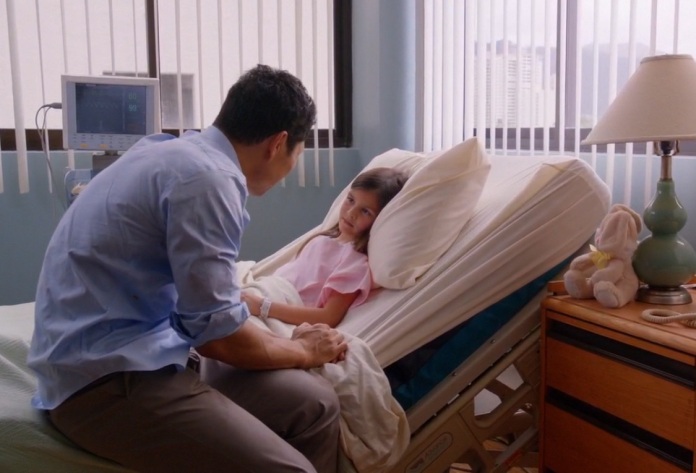 I can’t help but wonder what is coming up next.  The promos and spoilers say that Five-0 will be under siege when Shimoa sends her henchmen after Gabriel and they try to protect him.  Why would Five-0 ever protect Gabriel?  I’m thinking Gabriel holds the key to bringing down Shioma and Five-0 needs him.  But, from the pictures I’ve seen of the episode so far, Gabriel definitely looks the worse for wear and I wonder if he will even survive.   I wonder, if Gabriel does die, if his last words will be to Chin…. “please take care of Sarah”.

I will be very sad if next week proves to be the end of Gabriel.  I really love to hate that guy.  I have high hope for Michelle Shioma as a new baddie but I hate the idea of losing Gabriel.  I think it would be awesome to have these two at war, each trying to be the biggest baddie, and Five-0 in the middle trying to bring them both down and not knowing which way to turn next.  Only time will tell how this will all play out.  And that time, unfortunately, is very short.  Just one more short week.

Damn… I hate the sound of that!

Have a nice week my friends.  Aloha.  Malama Pono

All screen caps are mine unless otherwise noted.