Well, here it is, Sunday, and I find another weekend getting totally away from me. Why is it there is always so much to do? Can’t even seem to get on the computer to get anything written.  But, it’s Sunday and time to prioritize and write my review. Of course, I’m sure by now, all the other great reviewers have probably already made all these same observations but let’s give it a go anyway.

So, did you enjoy last week’s fun, lighthearted Valentine’s episode? Did you enjoy just watching the team kick back and relax and have fun? I did too. Now, welcome back to a Five-0 much closer to the norm.

Other than a few scenes between Danny and his mother Clara, there wasn’t anything lighthearted or funny about this episode. Unlike last week when our team was sitting around on a stake out and reminiscing about bad dates, this episode was packed with action, intrigue, and stunts galore, sprinkled in with a healthy dose of compassion.

We also seem to be back to having two entirely separate story lines going on at the same time with our team split for those stories. And, as it seems more often than not, it’s Danny who’s split from the team. While I totally understand why Danny isn’t in some episodes at all and why he’s apart from the team more than anyone else, I really wish it didn’t have to happen as much as it does. I miss him when he’s not there and I long for him to get his ass back to the office and the team when he’s in an episode but separate from them. But, whatever…. it is what it is.

And I did enjoy watching Danny and Clara attend one of those god-awful timeshare seminars. I actually like Clara, to a certain extent, but I’m really grateful the time-share scenes didn’t take up a ton of time. Not that I didn’t enjoy watching Clara labor-guilt Danny into helping her and him developing a slow burn of annoyance and anger as the day dragged on. I loved how he finally reached his boiling point and blew any chance Clara had for that cruise but there was so much more to this episode, I’m glad that part didn’t take a great deal of time. 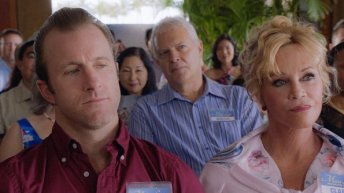 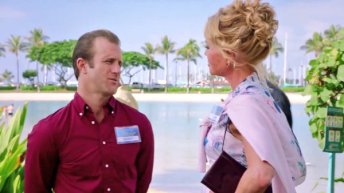 The introduction of a new character, Robert Coughlin, into this storyline elevated a cute, nonsensical story into something which seems likely to be the driving force for the remainder of the season. It started off with the FBI grilling Clara over Matt, the money he embezzled and whether she was aware of his whereabouts and if she had contact with him while he was on the run. 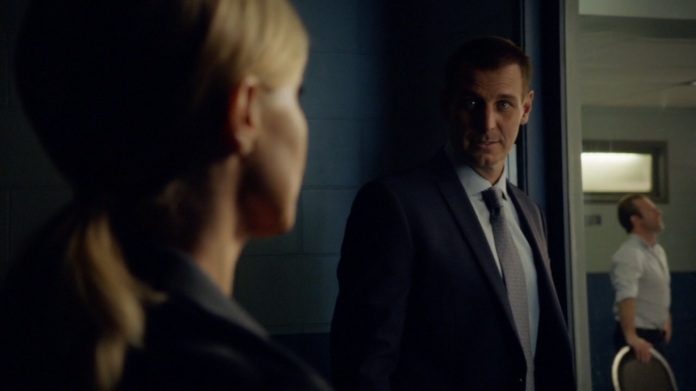 But Danny (brilliant detective that he is) soon deduced it had nothing to do with the money and Clara. Clara using a small bit of the money conveniently opened a door for the Feds to have an excuse to go after Five-0. The revelation that it is none other than Abby Dunn herself who’s being tasked to be there the next time Five-0 steps out of line answers the big question we were left with last week. 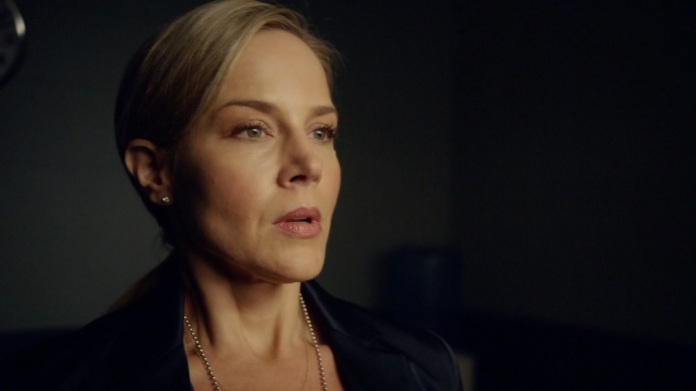 We now know that what we already suspected is true. Abby was sent to infiltrate Five-0 for a purpose and now we know what that purpose is. The fact that the Fed’s name is Coughlin tells us a lot. He is obviously related to Rex Coughlin, (brother, I’m guessing), the Internal Affairs investigator who had an unreasonable and completely unexplained hatred for Chin. His relentless pursuit of Chin ultimately got him killed via the pen wielding hand of Gabriel. We never found out where Coughlin’s unrelenting motivation to go after Chin came from. It is totally possible that his brother is now picking up where Rex, left off and using Clara as the impetus to go after not only Danny, but Chin and all of Five-0. Maybe, eventually, we will finally find out why Rex, and now Robert, hate Chin (and all of Five-0?) so much.

I also wonder just how high up in the agency Robert Coughin is. This totally smells like a personal vendetta, yet he was able to pull in other investigators to question Clara and Danny and even more disturbing, was able to get the San Francisco Police Department to lend out Abby for this undercover op. No way he did that on his own without approval from his superiors. Just how far up the chain of command does this go?

Of course, Five-0 has authorization from the Governor and the State of Hawaii. They have always relied on and used, (and in many cases over used) their immunity and means. They have also butted heads with the Feds on more than one occasion and come out on top each time. That has to have ruffled more than a few Federal feathers. This story is going to be far reaching and potentially deadly for our beloved team.

Of course, there is also Abby to consider in this mix. It’s more than plainly obvious that she has developed strong feelings for Chin, something she never expected to happen. Her behavior on Valentine’s day shows she isn’t feeling very good about what she’s doing. Hopefully, those feelings will throw a monkey wrench into her plans and she’ll end up helping Five-0 in the end. I really hope so, because I like Abby and Chin deserves some happiness.

Of course, there was also a crime of the week, a fascinating one involving a bank robbery, money laundering and, of course, murder, that revolved around a truly wonderful character named Neil. When I first heard that the episode would have a character who was autistic, I was really curious to see how it would be handled. Personally, I have no experience with autism, so have no point of reference to know whether a show is dealing with it respectfully or not, but to my untrained eye, it looked as though they did a really good job here.

I could be wrong, of course, and I’m not knowledgeable in the proper terminology, but Neil was portrayed as a highly functioning adult, totally capable of taking care of himself to a certain extent and holding down a job. He’s highly intelligent, has a strong sense of responsibility and is wonderfully loyal.  I thought his character was extremely well written and acted.

And I really loved how the team, especially Steve, interacted with Neil. They all treated him with the respect and dignity he deserved while going out of their way to make him feel comfortable and safe enough to help them with the investigation. And Neil did more than help. He was instrumental in solving the case of who murdered his best friend and why. Without him, Five-0 would have been at a distinct disadvantage. Neil was awesome. 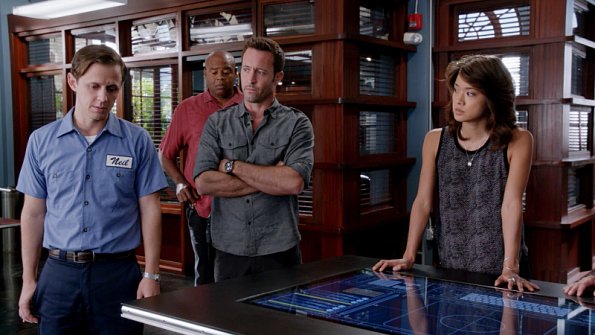 From the moment Steve met Neil and noticed he was interested in the space program (and deduced that he was Neil Armstrong’s namesake), it was wonderful to watch their interactions. Steve was patient and kind and helped Neil open up so he could tell him what he needed to know to find out who killed Neil’s best and only friend. I really wish we could have seen even more of the interaction between Neil and Steve. It was wonderful to see a tweet from Peter Lenkov saying there will be more footage of these two included in the Season 6 DVD. I’m really looking forward to seeing that. 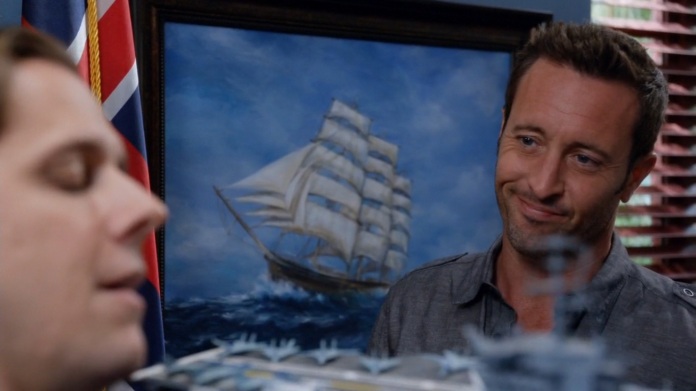 Of course, the moment the words “94 million dollars” were uttered, it was obvious who was going to be behind it all. Gabriel Waincroft. Not that it was a surprise, he keeps coming back like a belch from a bad onion. We’ve been longing for a full on Five-0 action sequence for a while now and this one did not disappoint. From the shootout with Gabriel’s men, with Kono taking one hell of a sniper shot to save Lou’s ass, to the brawl between Chin and Gabriel, this sequence was spectacular from start to finish. I don’t think we’ve seen a hand-to-hand like that since Steve and WoFat went at it in the 100th episode. Kudos to Daniel Dae Kim and Christopher Sean, the stunt crew, and Jeff Cadiente for going over and above on this one. 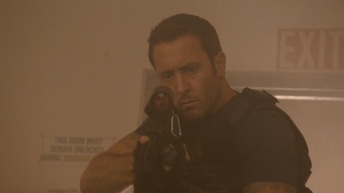 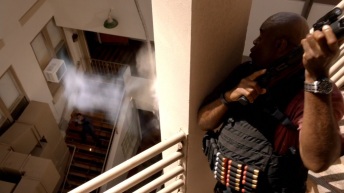 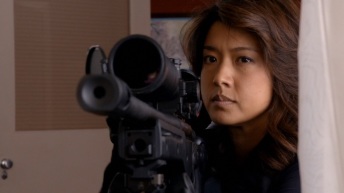 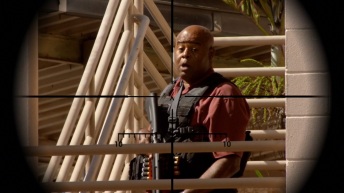 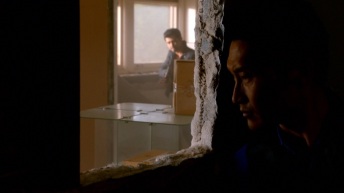 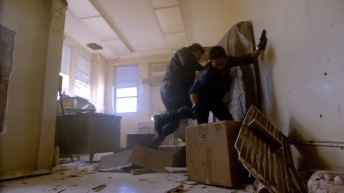 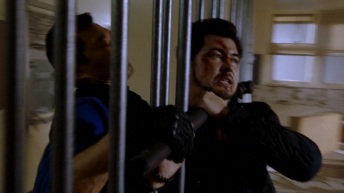 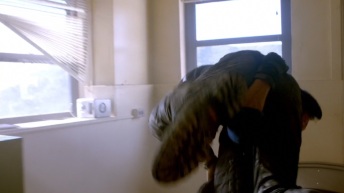 Gabriel sailing through the air and crashing into the roof of a car was another spectacular stunt and for one brief second I held my breath. No…. Gabriel can’t be dead. I love that guy. Well, I love to hate that guy. He’s just too deliciously evil to be dead so soon. Of course, this is Five-0 so suspension of believe isn’t anything new, so when the team finally got down to ground level and saw that Gabriel was gone I had to laugh. I mean, seriously? If you really watch how he landed, he didn’t hit his head, but he landed right on his lower back. There is no way in hell he didn’t break several bones and do serious damage to his back. How the hell did he walk away (or was he perhaps carried away by someone else?) from that??? Behold, Gabriel the phoenix! 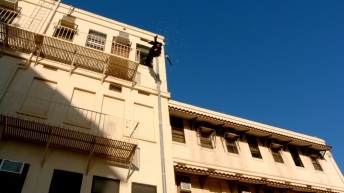 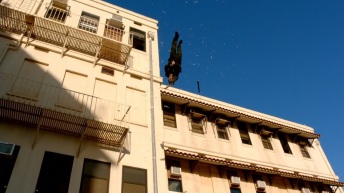 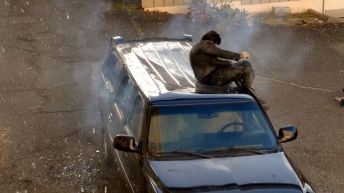 Will all of this end up being connected? Well, if you think about it, that money Matt embezzled from his clients way back in Season 1 has had a very long reach.

That money was, among other things, laundered through the cartel then added to by what Matt stole from Reyes. The incidences revolving around that money include Steve lying to the FBI, Danny letting Matt escape and then his subsequent murder of Reyes. It also includes the money Chin got from Gabriel to try to help Danny ransom Matt and Gabriel’s relocation to better prison digs because of it. Coughlin’s “deal” with Gabriel and Gabriel’s subsequent murder of Coughlin.

If Robert was looking for probable cause to go to his superiors and start an investigation, there is more than enough there. Steve for lying and letting Matt escape. Danny for letting Matt escape and for killing Reyes. Chin for taking money from a known drug lord and doing that drug lord a favor by getting him a better prison deal. There is also the fact that Coughlin was murdered by said drug lord. Then there is the money Matt left in an account for Clara. Oh.. yes… lots of things the FBI could be looking at. There is also the personal connection with this new Coughlin which will muddy the waters even more.

Matt set an awful lot into motion way back in Season 1 and the consequences are still being felt now. So…yeah… drama is coming… for sure! I just can’t wait to see how this all plays out! We’re in for a wild ride to the end of the season and I get the feeling this story will reach into Season 7 (God willing) as well.

Have a wonderful week, my friends. Aloha. Malama Pono.

Some screen caps this week are mine and some are courtesy of CBS.