After a Friday without Five-0 and a two week break I know I’m not the only one who looks forward to a brand new episode. I’m also pretty sure I’m not the only one who heard the names Pauly Shore, Jaleel White and Kevin Farley and ….well to be honest…rolled my eyes. Really? To be very honest, I have never been a fan of the types of movies actors like Shore and Farley make. And Jaleel? He will forever be Steve Urkel to me as unfair to him as that probably is. Then I read the synopsis of this episode and saw the sneak peeks and I can honestly say I was a bit apprehensive of what this episode would bring.

This episode had two distinct story lines with the team split up to cover them. I usually really dislike this because I love it when the entire team works together on a single big case. But in this instance neither case warranted the skills of all five team members. This actually makes sense when you really think about it. I mean, in real life crime doesn’t happen one case at a time. And even though Five-0 spends the vast majority of their time on Oahu, they are the Governor’s Task Force for the entire State of Hawaii which is not, obviously, just Oahu. So the fact that there are times when the team needs to split up to cover more than one case at a time is more realistic than thinking that while the team is covering one crime all the other crime on the islands takes a break.

For our first crime of the night, we have the honor of being introduced to Jake, Nolan and Mickey, the three biggest buffoons to ever leave Cleveland. These guys fabricate a story for their wives of male bonding while hunting wild boar. Seriously? I don’t know who’s more stupid in this scenario, these three imbeciles or their wives for believing them. Then these 40-something CPA’s set out on their real mission. To have as much sex as they can with as many college age spring breaking women as they can. Ok…..ewwww! 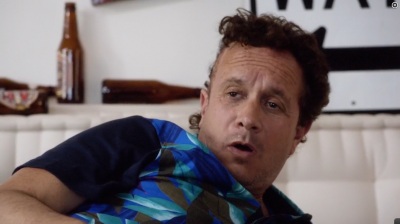 The fact that they wake up in their completely trashed hotel room (and exactly how DID the toilet end up in the living room?) not remembering a thing about the night before isn’t a surprise but the dead girl in the bathtub surely is. So what do these Einstein’s decide to do? They decide their best course of action is to drive the body out to the middle of nowhere and attempt to hide it. Excellent choice men…. excellent choice. 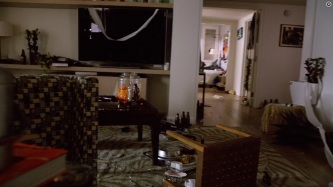 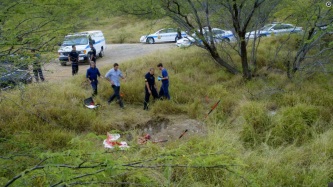 So, of course, Five-0 gets called in. The best part of this is we get to see Steve, Danny and Lou take an idiot each into interrogation rooms to see if they can get the stories of Dumb, Dumber and Dumbest to jive. They also listen to voicemails left on one of the guy’s phones by his very pissed off wife. I have to admit I was a bit put out at the way Steve and Danny kind of made the wife on the phone sound like a bit of a shrew. “She seems like quite a catch, this lady”. Ummmm guys? Her idiot of a 40 year old husband and his two equally moronic friends lied to her and went to Hawaii for the sole purpose of having as much sex as possible with college girls and she’s “a catch” for being a tad upset about it?? Major fail guys! 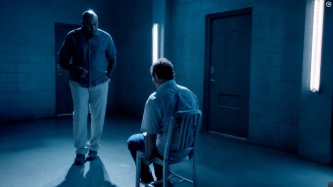 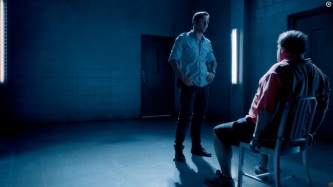 Anyway, when the guys decide these morons might actually be telling the truth and they simply crossed paths with the victim at some point they head off to reconstruct the evening these guys can’t remember. That means we’re lucky enough to get to follow along and see that it is indeed possible to commit enough idiocy in one night to last a lifetime. Welcome to the “worst pickup lines ever” Convention. 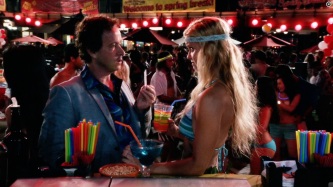 It turns out the girl is killed just as she’s about to meet the father she never knew, a wealthy man on his death bed. The moment I saw the old man’s son I knew he was the killer. He didn’t want his new found “sister” taking any part of his inheritance once the old man was dead. I have to admit it was a twist worthy of this show and one I never expected. 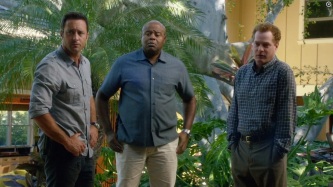 Ok…by now I’m sure you get the idea that this story line really wasn’t to my liking. Like I said before, I have never cared for the types of movies that have these kinds of story lines. But that doesn’t mean there weren’t things I did fine enjoyable about it. Just because I thought it was idiotic doesn’t mean I didn’t laugh several times at the situations these guys were getting into.

I thought it was hysterical the way all the young servers and bartenders, etc. Steve and Danny talked with commented on how the three guys either looked like “parents” or were “really old….like 40!” Considering that, “like 40” is only a year or so older than Steve and Danny themselves are…well….OUCH! LOL

And I always love it when Steve goes into “Uncle Steve” mode: 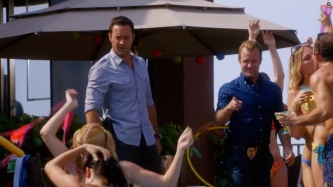 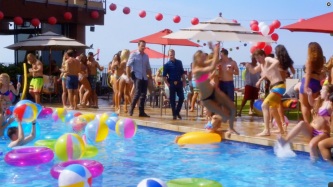 Then there is Max. Ahhhhhh Max you are truly an enigma wrapped in a riddle brah!

Max: “There was an incident in Cancun…spring of ’94….that included a bottle of absinthe, a regrettable tattoo and 48 hours in a Mexican prison”. Lou may not want to know any of the details but I sure as hell do! LOL

Of the two cases of the night, Chin and Kono’s case had more of an opportunity to be expanded into a full blown case for the entire team than did the Hangover. But I’m kind of glad they didn’t do that because I really liked the fact that we got to see Chin and Kono along with Jerry work this case. There were some really great moments and scenes in this storyline and that’s what saved this episode for me.

I loved seeing Jerry expanding his duties at the Shrimp Truck and that Kamekona is continuing to expand his entrepreneurial reach. But Jerry is probably right. 15 minute delivery or your order is free seems like a stretch considering the size of the island and the amount of traffic that seems to be a constant there. But it was hysterical seeing Kame’s face on the back of Jerry’s helmet. Add to that the theme from Speed Racer from Jerry’s “driving playlist” and this was one of my favorite scenes. 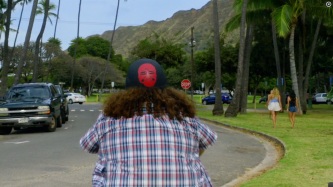 Jerry has proved time and time again that he is an asset to Five-0 and this episode was no exception. Witnessing an apparent kidnapping and following the car to find a dead body, Jerry got the Chin/Kono case off and running. But poor Jerry… for all the help he’s given the team the last couple of years he really wants a Five-0 badge so bad.

Jerry: You know how many dead bodies I’d seen before I started hanging out with Five-0? That would be none…nada…zero! And the fun doesn’t stop there. I mean, let’s not forget being accused of robbery, being abducted, having my life’s work stolen and, oh yeah…there was that Chinese spy who broke into my house and tried to off me. So where’s the love, the aloha, a badge would be nice.”

I’ve been watching cop shows all my life so seeing a sketch artist sitting with a witness trying to construct a face is nothing new. But how friggin’ cool is this? Makes sense in this day and age that paper and pencil would be replaced by a tablet and technology AND they can run the facial rec right from there. Awesome! 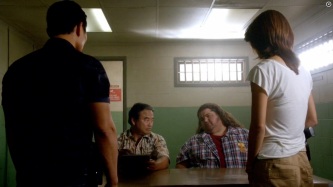 When the kidnapping and sex trafficking case turns out to be a slave labor camp farming coffee we get to see Chin and Kono head off to the Big Island of Hawaii. I LOVE it when we get to visit other islands!

And, come on? Who doesn’t love seeing the Wonder twins working together on their own and going all bad ass to bring down their perp? They really are one awesome combination. 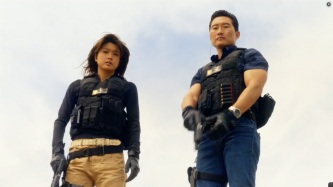 I loved the ending with everyone all dressed up to watch as Jerry gets awarded the Honolulu Police Department’s Medal of Valor at a public ceremony at the State Building. Jerry may still be longing for that Five-0 badge but that medal is pretty damn cool and well deserved. 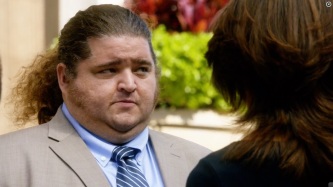 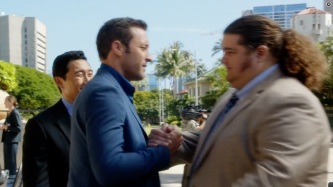 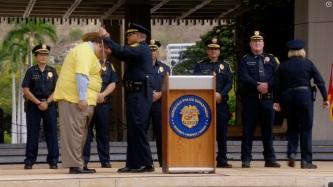 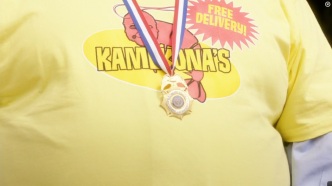 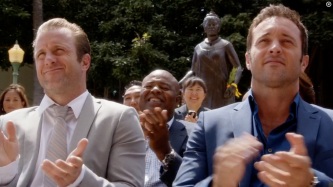 I found it interesting that Chin hasn’t spoken to anyone yet about those pictures Gabriel left at his house but it does make sense that Steve is the first person he does show them too and that he hasn’t shown them to Kono yet. There is no need to upset Kono yet, not when he has no idea what they mean. It’s also interesting that he was able to authenticate the photos but has not, as yet, been able to identify the man seen with Adam. To me that means this man isn’t in any database that Chin has access to. Curiouser and curiouser!

All in all an episode that will not go down as a favorite by any means but still one I did enjoy. It’s Five-0 and you guys know me. I always find something to enjoy. There was a great deal of Steve and Danny interaction in this episode and we haven’t had a lot of that lately. Just that alone made it worthwhile to watch and re-watch. As always, they are the main reason I adore this show as much as I do. 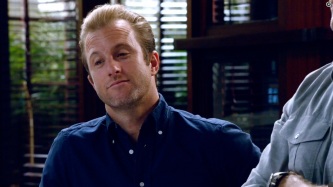 So…another new next week and this one should be an intense thrill ride with Kono alone and lost at sea. I can’t wait to see how the guys are going to react to her predicament and how Kono will manage to pull herself out of it. It’s going to be a great one I am positive!

Have a great week my friends! Aloha!