As we go through life, there are many things that are not forgotten. Oh, we may think we’ve put things behind us because they’re not front and center in our thoughts every day. But, they are there, they are part of us and they have made us who we are. We all have wonderful memories we can pull up when we need to smile. We all have memories of times of sadness and loss. Each and every one a thread that has been woven to create the people we are today. This episode was filled with things people were trying to forget, things they could never forget and people who hope others forget. None of that happened. Nothing is ever forgotten.

First off there is poor Samantha Grover. She is still not dealing well with what she went through with Ian in the Season 4 finale and is still having nightmares about watching WoFat kill him. I really liked the scene between Chin and Lou to start the episode. I think it’s great they are still fishing buddies and it seems Lou has told the team, or at least Chin, about her nightmares because Chin knew this one wasn’t her first. 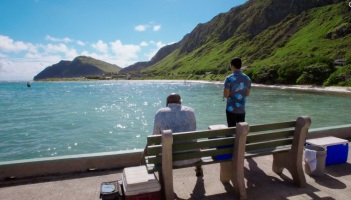 Chin understands all too well. Obviously he had nightmares for a long time of Malia dying in his arms. I found it really sad the way Chin told Lou that he’s doing the best thing for Samantha just by being there for her because, in those dark nights after Malia died, there was no one there to pull Chin out of his nightmares. Samantha, like Chin, will need time to come to terms with what happened but, of course, it will never be forgotten. 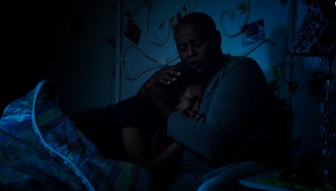 “A story about a prison guard named “Angry” does not end well”. This line from Danny pretty much sums up the crime of the week for me. I have to admit I can’t remember when I have hated a perp as much as I hated Alex Mackey, “HuHu”, the prison guard. Between Paul Delano baiting Chin in the hospital about Malia and HuHu, I wouldn’t have minded if either one of those guys got the beat down I so desperately wanted to give them both myself. And HuHu gave me a definite case of the creeps, even at the very beginning before we even knew he was going to be the bad guy, his look freaked me out. And the coldness and complete lack of any emotion, even anger, when he pulled that trigger gave me all kinds of chills. 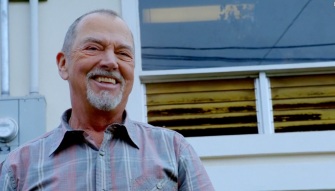 But again, because of something that could not be forgotten, Dr. DuPont was drawn into a 40 year old mystery which ultimately got her killed, along with Tahni, the man who set her on the path in the first place. Tahni never forgot the four boys who were nice to him, who looked out for him, in the reform school. Never forgot how they just disappeared one day and his suspicion they were murdered. The entire reform school story was something else that sent chills down my spine, especially the way those poor boys died. Machey’s total lack of remorse and his smug, superior attitude as if he did the world a favor, OMG I wanted Steve and Danny both to beat the ever loving crap out of him right there.

This case affected everyone involved in it but it affected Steve the most. I believe he may have seen a little bit of himself in those lost boys. After his mother “died” and his father sent him away Steve could have been as alone and vulnerable as those boys if he hadn’t had someone to take him in and hadn’t found a 2nd home with the Navy. I also think he saw a bit himself in the homeless boy Nahale. Nahale’s mother also died and he lost his father, this time to jail. He was totally alone but unlike Steve at his age, didn’t have anyone there to fall back on, to look out for him. After seeing what happened to those boys Steve doesn’t want to throw this kid into the system. He wants to give him a chance to turn his life around.  Steve has never forgotten what it was like to feel alone and adrift.

When Steve walked into his office to face the thief who’d stolen his car he was ready to rip him a new one until he laid eyes on him and realized he was just a scared kid. You could see Steve’s anger immediately begin to melt away as he thought of those four dead boys again. And Nahale doesn’t try to convince Steve he’s a good kid, or try to talk him out of pressing charges by making some kind of grand promise he’ll never do it again. Instead he shows Steve he’s a good kid by immediately accepting the fact that he’s going to jail and vows to repay Steve the moment he gets out. Honestly, I think seeing that look on Steve’s face from across the desk would motivate any boy to the straight and narrow. 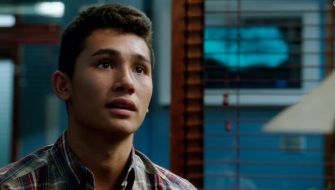 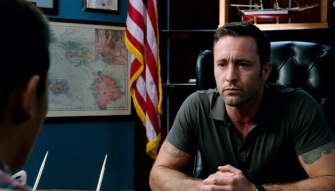 What that boy needs, needs more than anything, is a shot at life and having him working for Kamekona is a stroke of genius. Kame knows what it’s like to screw up and end up in Halawa. But he also knows and will never forget what it’s like to have someone in your corner who believes in you and is willing to take a chance on you. He will be a great mentor for Nahale. That boy needs stable male influences.

Along with Kame and the men of Five-0 I can’t think of one better influence than Steve McGarrett.  Because, if Steve McGarrett believes in one thing in life, it is second chances, just like all the other broken toys that have joined and bonded into his wonderful Ohana. Steve may be a tough as nails, no-nonsense Navy Seal but, as we have always known, there is a heart of gold under all that Kevlar. A soft heart, just like Danny said…a half-baked cookie. Or…also using Danny’s words …. A half-baked, testosterone filled, marshmallow cookie!

Now a little personal observation on Duke and Pua. I know there are many people who don’t care for Pua and even though I don’t dislike him, as I have said before, I do prefer him in small doses. I liked how he was used here. The expressions on his and Duke’s faces as Steve first saw his dismantled car were priceless. They both looked a bit scared like they were waiting for a McGarrett explosion. I’ve also seen people wonder why Pua needs to be there and why we can’t just have Duke by himself. Like I said, I don’t mind Pua and I like to think of him as another little nod to the past history of the characters. Back when Chin was a rookie cop, John McGarrett was his training officer. I like to think that the reason we always seem to see Pua with Duke is for the same reason. Of course, I don’t see Pua becoming the cop Chin is but I like the fact Duke is doing for Pua what John did for Chin. The fact that they are played by two local actors makes it extra special in my book.

Lastly a few words about Steve and Danny:

I love the brotherhood between Steve and Danny more than anything on this show. Coming from a similar background as Danny (large, rambunctious, extremely verbal “fight for survival” family) I understand his nature easily. I also understand the need to be verbally tough in the face of such a family. I remember having a back and forth exchange with my best friend in a store once when the cashier behind the counter chuckled and said “you two have GOT to be sisters!” He understood too. People who don’t come from that type of background can sometimes see these exchanges as mean-spirited and cruel. I have never seen the banter between Steve and Danny as such.

But, having said that, I do sense that Danny’s ribbing of Steve has developed a much sharper edge lately and that it’s beginning to grate on Steve, to the point where he’s getting more agitated then he used to. Danny totally over reacted to Steve leaving Gracie to chase after his car but then Steve knows Danny is an extremely over protective father. Danny was completely insensitive to Steve’s upset over his stolen car but then Steve was kind of mean-spirited in his criticism of Danny’s parenting, something Danny takes extremely seriously.

I don’t know if this is a concerted effort by the writers to add a bit of strife to the Steve/Danny friendship. I mean, I suppose it could just be a way to justify another on screen therapy session since Chin did mention the guys are still seeing that therapist. Or maybe it’s a bit of a set up for the big episode where Danny’s in trouble in a South American jail. Nothing adds angst to a story more than a guy feeling horrendously guilty for the way he treated his friend and brother when there’s a really good chance he may never see him again.

Oh…..almost forgot!  Is there anyone who doesn’t love some Gracie and Uncle Steve time???? Nope….Didn’t think so! 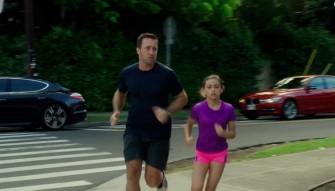 Personally I can’t wait to find out what’s coming next! No new episode next week so we have some time to catch our breathe. I have a feeling we’re going to need it.  Have a great week my friends!