For some reason, whenever I eat a spicy meal, once I’m done the next thing I want is something sweet. It’s as if my taste needs something not as strong, not as intense. It’s as if it needs a bit of a break.

Five-0 seems to understand this concept very well because, usually, whenever there is an episode that is extremely stressful or highly emotionally charged the next episode is more than likely going to be lighter, with more humor and more of the Ohana moments we all love. Like that small peppermint patty after the firehouse chili…a breath of fresh air. After the gut wrenching 100th episode this installment fit the bill quite nicely.

One of the things I adore about this show is how I never know what the hell is going to happen next. This week’s crime of the week did not disappoint and being that this is Five-0….time for a convoluted trek through suspects that inevitably leads me to total certainty as to who the murderer is which, of course, is 100% WRONG! I was absolutely positive the family’s annoyingly creepy lawyer was behind the entire thing. I know I say this every week, but honestly, this one really did throw me for a loop. The female murder victim hired a killer to take out both her husband and herself because she knew the husbands legal problems would strip her boys out of all their inheritance and leave them with nothing. The woman was seriously in love with money and even more seriously screwed up in the head to believe her boys would be fine with a bank account full of blood money instead of their parents. Unbelievable! Not only that, there is no way she would have known that her boys wouldn’t be the ones to come home and find them.  What the hell was she thinking!

One of the best scenes in this episode was the car and foot chase between Five-0 and Ty Gable. Listening to Danny and Grover have their own cargument over Lou’s driving was inspired. “Have you been to Chicago?! Well, in Chicago when we tell someone to drive…this is how we drive… and in the SNOW!!” ROFL Actually, I’ve never really understood Danny’s fear of Steve’s and now Grover’s driving. I mean, I myself have driven in Jersey many many times and I can vouch for the fact there are some crazy ass drivers in that state not to mention that most of the roads are laid out in the most bizarre patterns ever conceived. Danny should be used to nutso driving and also be pretty good at it himself. 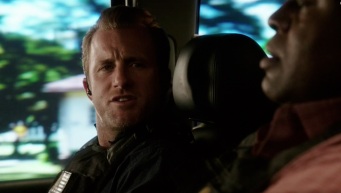 The other part of this chase, with Steve running after Ty by jumping from the tops of one truck after another, was a stunt like none we’ve ever seen before. Cudos to Jeff Cadiente for always finding a way to make the stunts not only exciting but always different. We never see the same stunt twice and between the imagination of Jeff and the physical skills of both Alex and Justin Sundquist every new stunt experience is incredible. 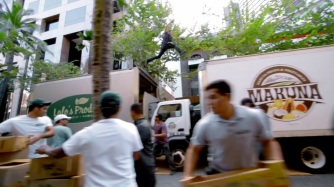 But, of course, the best part of this episode was the impending wedding of Aunt Deb and her fiancé Leonard. Could these two be any more adorable? I just loved how Steve immediately went into paranoid over-protective mode as soon as he found out they were getting married….tomorrow! Steve being Steve, of course, he couldn’t just accept the situation and with, as Jerry noted, his Spidey sense going off, Steve had to dig into who exactly Leornard was and try to protect his aunt. 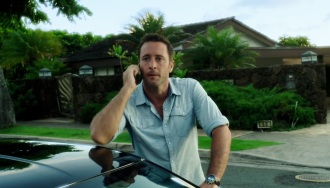 As it turned out, all totally unnecessary. Deb knew exactly who Leonard was, where he came from, and what he did and did not do. Her explanation to Steve about understanding the disappointments of life and finally finding and embracing love was very heartfelt and tender. 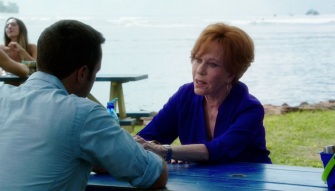 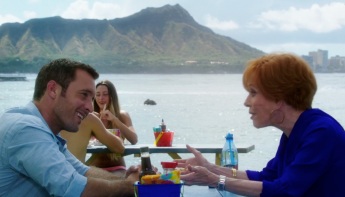 And Leonard, knowing Steve is a cop knows his past would be checked out. His joy at finding Deb and finding a love to cherish for as long as he has left was so sad. Giving Steve the box with the missing evidence to show his good will and his good nature was a great touch. Steve deciding not to hand it over for “a couple of months” so Deb and Leonard could spend what time they have left in happiness was a beautiful gesture.

The wedding was absolutely beautiful. Deb looked gorgeous and, damn…do all our boys clean up nice! Add to that the beautiful Royal Hawaiian and the breathtaking view it was a ceremony anyone would dream of having. And what a ceremony it was with Nicky the Kid officiating. I couldn’t stop laughing as he conducted his… wedding by song lyric! “A few months ago, they were just “strangers in the night” now they know “their love is here to stay” and they’re going to be together “come rain or come shine”…. “the best is yet to come”.  Grover: “Your boy Sinatra needs some new material”. ROFL Priceless! 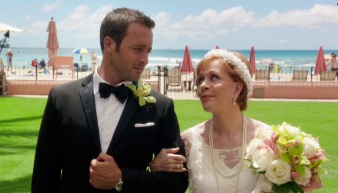 Another thing I really loved was all the humor sprinkled throughout this episode. Again, a perfect counter point to the heavy emotional toll from #100. Other than those already mentioned above…here are a few more favorites:

Danny: “You’re like a big marshmallow filled with testosterone.” 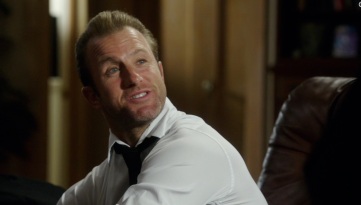 Danny: “You’ll get used to it” to Grover as Steve takes off in a hail of gunfire demanding “cover”.

Steve: “Thank you Nancy Drew” to Danny when Danny said he’d solved “The Mystery of the Smooth Hands”

Deb as Steve’s phone rings: “Work….he has to go”
Steve after answering his phone: “It’s work….I have to go” 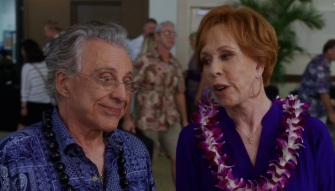 The entire blue room scene between Steve, Danny and Ty was hysterical. Their synchronized “we’re telling your boss” was so funny as well as Danny’s reactions through the entire thing. Anything that can get Scott to giggle is golden in my book! 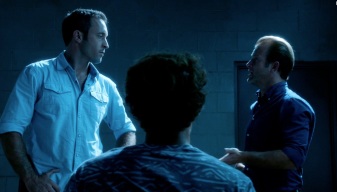 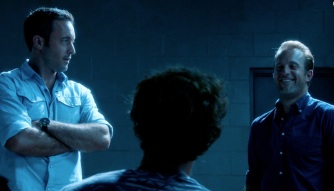 Loved the scene with Kamekona at the shrimp truck and how they mentioned Kame saving Thanksgiving last year with his shrimp and how Steve still had some Shrimp Bucks from their last poker game…even if they expired! LOL 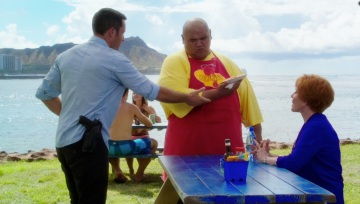 “You know what? There better not be all this fighting all the way to the thing, man, ‘cause I can’t handle it…gonna give you two a time out!” 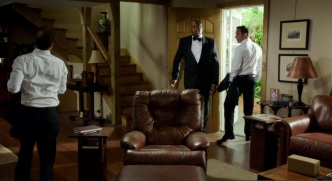 We finally have closer to the Steve/Catherine relationship and I have to say….it really is about time. I always liked Catherine…well I really liked her when she was still in the Navy…less when she became a member of the team …but yes I did like her. But I guess their relationship ultimately was better as a long distance one. Being together 24/7 just wasn’t in the cards for them. And it really isn’t all about how much they loved each other either, in my opinion.

Just because two people love each other doesn’t mean it’s always going to work out. A relationship…a true long term committed relationship is about more than just love. Love is the most important thing, of course, but sometimes love isn’t always enough. You have to be willing to give up everything for the one you love. You have to place that person above and beyond all else. You have to be willing to sacrifice anything for that person, give up what is most dear to you to be with that person and to make that person happy. That is more than love. That is commitment. That is the breath which fills your lungs. It’s not being able to even think about life without that person. Think about what Danny did to be with Gracie. He left everything and everyone he loved in Jersey. He went to a place he knew nothing about, alone, with no support system, no job, no home, to battle his ex-wife so he could be with his baby girl a couple of days a week. That is more than love…that is commitment. Yes, I understand that’s a parent/child relationship but the sentiment is the same.

The fact that Catherine felt she needed to stay in Afghanistan until she found and saved Najib is admirable and quite understandable. She is intelligent, capable, strong and well trained to complete her mission. But that mission was over. Najib was safe and home. For her to choose to stay there, to build a new life there and to specifically tell Steve not to wait for her, to tell him that “she found her place”, well to me, that shows that she didn’t love him well enough because if she did, “her place” would be with him. And if that’s the case, its better it’s over so he can move on and try to find some happiness. God knows, no one deserves it more than he does.

This episode ended in the most charming way. Like the last episode, this one also had Steve in tears but this time, tears of happiness. Yes it was a bit sappy. Yes it was a bit syrupy. But I was with Steve…tears in my eyes listening to Aunt Deb serenade her new husband with Gershwin. It was a beautiful way to end this wonderful episode. In a word….. it ‘S Wonderful” 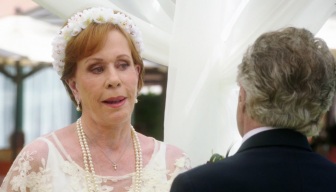