Last night’s Five-0 was a bit of a departure from the rough and tumble, guns blazing, car crashing adventure we’ve become accustomed to with this show. But that’s ok. Sometimes we need an episode where we step back a bit, get more perspective on characters and get the heart strings tugged on a bit.

The cold case murder of Paul Clayton, the unsolved case which haunted John McGarrett, was just the catalyst an episode like this one needed. Steve, still haunted by the death of his father, visits his grave on the 4th anniversary of his death. The “conversation” Steve has with John was extremely well written, acted beautifully by Alex and very very touching. The gesture of leaving the quarter on the grave stone…symbolizing that a person was with the serviceman when he died, which technically Steve was with his dad…..was very moving. Steve catching John up on Aunt Deb’s decision to try chemo after all and how great Mary is doing with little Joanie had me tearing up just a bit. “I wish you were here for all of this, I think you would have liked being a grandfather” just did me in. Alex just kills scenes like this. 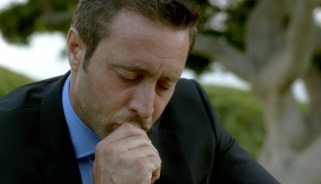 Meeting Ellie Clayton at John’s grave site sets Steve on the path to try to solve the cold case of her father’s murder. Doing so shows the ongoing need Steve feels to be closer to his father but may also be a bit of the guilt he feels for not being able to protect him or save him. He connects with Ellie not only because she knew John and obviously cared a great deal for him, but because Ellie also lost her father at a young age. Steve can’t bring their fathers back but he can try to bring closure to the case that connected their lives. 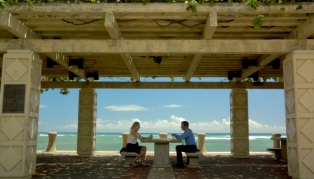 Some of my favorite things:

• I really liked all the flashbacks. H50 seems to be doing a lot of this type of thing this season and I think they are doing it really well. I adore anytime Bill Sadler is on my screen as John McGarrett and the scenes with young Ellie as well as Chin and “little Stevie” were fantastic. Bill is an incredible actor and I really love the way he’s able to show just how much John lost, how much regret he had over the decisions he felt he had to make.  I thought it was a great touch when Chin asked John if he’d spoken to Steve lately and John answered “It’s been awhile”.  Those were Steve’s exact words, when asked by the pilot of the plane taking him back for John’s funeral, how long it had been since he’d been home.

It helps to remember that John was a great cop, but more importantly a really good dad. He only did what he did because he felt he had no choice and even though he did it to protect his kids it was a regret he lived with until he died. We see it in the way he takes care of Ellie, who was almost the same age as Mary. He felt he couldn’t undo what was necessary for his kids, but he could give Ellie the support she needed. Maybe he felt by helping Ellie he was somehow repaying his debt to Mary.

We also heard that regret and resignation in his voice 4 years ago, when Steve first listened to the tape in the Champ Box but to hear Chin say it again to Steve from his firsthand experience working with John brought a lump to my throat, as it did to Steve’s. I really like that Chin is a bridge for Steve between the father he left behind when he was 15 and the man John McGarrett truly was. The emotions conveyed by both Daniel Dae Kim and Alex in these scenes was tangible. 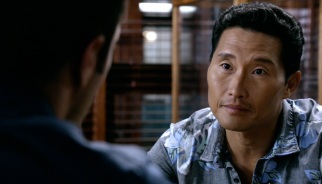 • I like how they used Jorden Lewis in this episode. After listening to his story and realizing he never had anything to do with the murder they offered him the opportunity to help catch the man who actually killed Clayton. The fact that Clayton died because he was trying to help Jorden, trying to win the money Jorden needed to pay off the debt owed to Sykes so Jorden could stop dealing was interesting. I’m extremely glad Jorden didn’t die when he was shot.

• I really liked seeing Mindy (Dr. Shaw) being included in out of work stuff with the others. Nice to see they are treating her like one of their own already. And being involved in Jerry’s packing party, bantering back and forth with Jerry was really fun. I know there are a lot of people who would rather Jerry not take up any screen time but I really like him, the way he interacts with the rest of the cast, especially Chin and I’m looking forward to seeing the trouble he’s getting himself into and how Five-0 will get him out of it. 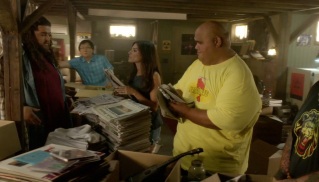 • I thought the virtual autopsy scene with Mindy and Max was really cool. I know they do these types of things on other crime shows but I’ve never seen it on H50 before. I really liked it a lot.

• I think I’m really going to like Ellie. She’s strong, strong willed and smart. She’s not afraid to do what needs to be done to get to the bottom of things. Something I’m sure she learned from losing her father but also as a prosecuting attorney. You can’t be wishy-washy and do that job well. I liked the chemistry between her and Steve and look forward to seeing how their friendship develops. As a prosecuting attorney I’m sure their paths will cross again well before the 5th anniversary of John’s death.

• How is Ellie a prosecuting attorney in Honolulu, had a personal relationship with John yet she didn’t recognize Steve’s name or know he was Five-0? I mean, of course, it’s possible their paths never crossed but, come on… Five-0 is in the news all the time, I’m sure Ellie knows of their existence. How can she not know who the leader of Five-0 is??

• John told young Ellie he has a daughter just her age, and he tells her (Mary) that when “things get tough, you need to be strong, you need to be brave, and if you can do that, then you’re going to be ok”. When did he tell Mary that? Before he sent her away? Back in Season 1 Mary said she hadn’t seen or spoken to her father since he sent her away. Am I remembering that incorrectly? That little flashback, although a really good one, just seemed off to me because of that.

• I missed Danny. I fully expected him not to be there, fully expected him to be in Jersey with his family dealing with the aftermath of the debacle with Matt. I’m very glad Steve was calling him, leaving him messages to check up on him but I really missed him not being there. For me, Five-0 has always been anchored by the team that is Steve and Danny. Just feels like a big chunk is missing when he’s not there.

All in all I liked the episode, after all, I like them all but I have to say it didn’t touch me as much as I thought it would. Don’t get me wrong, the writing was great and the acting…fantastic as always…but I think I was expecting more even though I can’t really explain what that might have been. Maybe I missed the gun battles, explosions and car chases more than I thought I would.

But, what this episode did for me was present me with a nice set up for things to come. First in the friendship between Steve and Ellie. At the end, it seemed pretty obvious that she took more of a personal interest in Steve than he did in her. Like I said above, for some God only knows reason, she’s a prosecuting attorney who doesn’t know who the leader of Five-0 is, so I hardly expect her to know what his “situation” is. If I were her and met him under those circumstances I’d be extremely interested in him too. Unless she’s gay it’s only human. Steve, on the other hand, well, he likes her, he feels a connection to her because of her relationship with his father and they may forge a great friendship. As for now, I think, that’s all it’s going to be.

But more important, this episode sets up things for Episode #100. Steve is remembering John in a good light, happy memories, as a good cop and a good dad. I think that’s going to feed right into whatever WoFat has up his sleeve to mess with Steve’s head. That is going to be epic and I can’t wait to see how it all unfolds.